Jet fuel prices surged to the highest since March 2014 on Monday, helped also by a weakening rupee

Mumbai: Airfares are expected to rise this quarter, tracking sharply higher crude oil prices and traditionally robust demand during the festival season. Jet fuel prices surged to the highest since March 2014 on Monday, helped also by a weakening rupee. With domestic airlines suffering from lower yields and mounting costs, they are likely to pass on the burden this time round. The government also decided last week to impose a 5% tax on import of jet fuel. 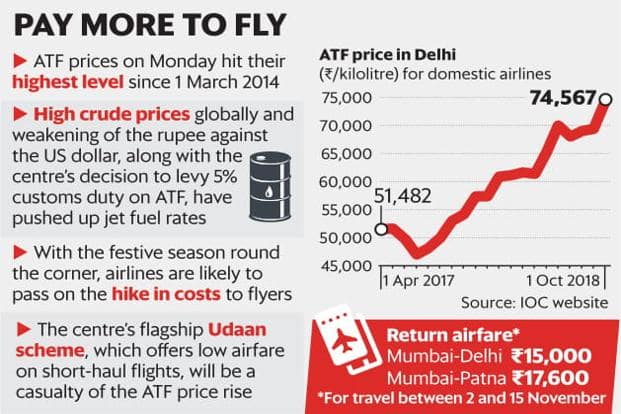 “The effective hike in jet fuel should be close to 12% if other duties, levies, surcharges and handling fees are added, and it’s extremely unlikely that airlines will absorb the fuel price hike," said Mark Martin, founder and chief executive of aviation consulting firm Martin Consulting LLC. “As a result of this hike, there will be casualties and we expect this will be the government’s flagship UDAN scheme, as tickets will no longer be priced at ₹ 2,500 for an hour flight (on routes connecting smaller cities and towns)," he added.

Over the last few months, domestic airlines have been pummelled by rising fuel prices and a falling rupee, as well as intense competition, which prevented them from increasing fares sufficiently to cover the higher costs. This has led to airlines reporting losses or lower profits in the last quarter. In the past year, Brent crude has gained 44.3%, while the rupee has weakened 9.2% against the dollar.

“Traditionally, the festive season or the third quarter sees higher yields because of stronger demand, which allows airlines a breather as it lets them increase ticket prices," said Sharat Dhall, chief operating officer (B2C) at Yatra Online Pvt. Ltd. “We expect airlines to increase fares by at least 5-10% during the December quarter over the previous quarter."

The rally in fuel prices comes amid the 5% increase in customs duty on jet fuel. An Indian Oil spokesperson, however, said the rise in customs duty has not been passed on to airlines, which buy jet fuel locally, and has only been levied on international purchases.

An executive at a budget airline, who didn’t want to be named, said airlines had no option but to pass on rising costs to flyers.

On Monday, the minimum cost of a return ticket on the Mumbai-Delhi route for travel between 2 and 15 November was ₹ 15,000 on a travel portal.