Swiggy is on top of the online food chain, shows survey

A RedSeer Consulting survey for the October-December period has ranked Swiggy No.1 with a total score of 96, followed by Zomato with 82 points, Uber Eats 73 and Ola's Foodpanda 70.

Bengaluru: Online food ordering and delivery startup Swiggy, run by Bundl Technologies Pvt. Ltd, emerged on top in trust and customer satisfaction in a food-tech survey by research firm RedSeer Management Consulting Pvt. Ltd. According to the latest edition of the RedSeer FoodTech Leadership Index (FLI), Swiggy ranked no. 1 with a total score of 96, outscoring arch-rival Zomato (Zomato Media Pvt. Ltd), which came in second with a score of 82 in the fourth quarter of 2018.

Uber Eats, the online food delivery service owned by Uber Technologies Inc., and Ola’s Foodpanda came in third and fourth at 73 and 70, respectively.

Only last month, Swiggy raised $1 billion in the biggest-ever funding round in the country’s booming food-tech space, increasing pressure on Zomato to also quickly raise fresh funds. In the business of food delivery, top companies such as Swiggy and Zomato need to keep raising capital to win share in a cut-throat, hyper-competitive market.

The RedSeer survey considered over 20 parameters across three broad pillars: most preferred or trusted brand for online consumers; maximum value for money along with a meaningful assortment; and best buying experience from restaurant delivery to post-delivery experience. 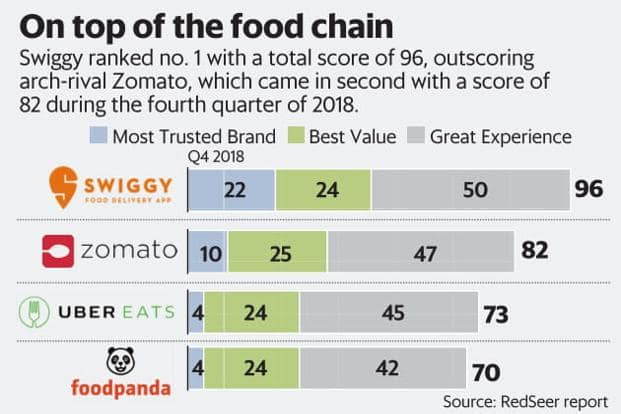 After weighing all of these factors, an overall score was assigned to each firm. Swiggy outscored Zomato by the widest margin when it came to parameters of trust, which included measuring aspects like top-of-the-mind recall and unaided recall. It scored 22 on these parameters versus Zomato’s score of 10.

Swiggy also edged past Zomato, albeit by a smaller margin, when it came to best user experience starting from exploring and ordering dishes to cancellations, customer support and overall net promoter score (NPS). NPS is a key customer satisfaction metric based on how likely customers are to recommend a brand or company.

After its latest funding round, Swiggy became the country’s fifth most valuable startup, commanding a valuation of $3.3 billion and underscoring the stunning rise of a venture that was launched four years ago. It has raised $1.5 billion in total so far, according to data from Crunchbase, which also showed that Zomato has, in comparison, raised $653.8 million so far. Still, Zomato has managed to close the gap over the past year and also received over $400 million in two rounds of funding last year.

In terms of value for money, all the top four food-tech startups were locked at around the same score on Redseer’s survey. RedSeer surveyed over 900 customers across core cities—Delhi, Mumbai, Bengaluru, Hyderabad, Pune, Chennai and Kolkata—during a quarter for its food-tech survey.