Ren Zhengfei denied suggestions that Huawei aids the Chinese government in espionage, saying it has no regular contact with Beijing, as his technology empire faces its biggest crisis in its three decades of existence

Ren denied suggestions that Huawei aids the Chinese government in espionage, saying it has no regular contact with Beijing, as his technology empire faces its biggest crisis in its three decades of existence. He said he’ll take a wait-and-see approach as to whether Trump will intervene on behalf of Huawei finance chief Meng Wanzhou. Meng -- Ren’s eldest daughter -- is in Canada facing extradition to the U.S. on allegations of helping defraud banks to avoid sanctions on Iran.

The emergence of the reclusive Ren, who last spoke with foreign media in 2015, underscores the depth of the attacks on Huawei, the largest symbol of China’s growing technological might. Meng’s arrest helped crystallize fears about its growing clout in areas from cutting-edge wireless infrastructure and semiconductors to consumer gadgets. Washington has since convinced a growing list of allies to blacklist Huawei networking equipment.

“I love my country, I support the Communist Party. But I will not do anything to harm the world," the 74-year-old said in a roundtable briefing, only his third formal chat with foreign reporters. “I don’t see a close connection between my personal political beliefs and the businesses of Huawei."

Ren said he would decline any request from Beijing for sensitive information on its clients and stressed the potential for cooperation with the U.S. and Trump’s administration. And he played down Huawei’s role in current tensions between Washington and Beijing, which have rattled investors and corporations worldwide.

“Huawei is only a sesame seed in the trade conflict between China and the U.S.," Ren said from the company’s campus in Shenzhen. “Trump is a great president. He dares to massively cut taxes, which will benefit business. But you have to treat well the companies and countries so that they are willing to invest in the U.S. and the government will be able to collect enough tax."

Ren, a legendary figure in Chinese business circles, is a uniquely placed voice in a conflict that will help define the global landscape in coming years.

A string of Huawei executives -- all the way up to rotating chairman Ken Hu --- have taken to media in recent weeks to deny allegations of espionage and challenge its accusers to provide proof of shady dealings. But the arrest in Poland last week of a sales executive accused of spying may have helped prompt the reclusive CEO to personally marshal Huawei’s global response. The employee in Poland was fired over the weekend.

Despite the potential impact on his business, Ren said he was confident Huawei’s revenue would grow to $125 billion in 2019 from more than $100 billion last year.

“Huawei is not a public company, we don’t need a beautiful earnings report," Ren said. “If they don’t want Huawei to be in some markets, we can scale down a bit. As long as we can survive and feed our employees, there’s a future for us."

Ren built a company that generates more sales than Alibaba Group Holding Ltd. and Tencent Holdings Ltd. combined. In 2018, Huawei overtook Apple Inc. in smartphone sales, a triumph that only served to burnish his tech credentials. His quotes adorn the walls of the food court at Huawei’s sprawling campus on the outskirts of the southern metropolis of Shenzhen, and employees still speak of him in reverent tones. 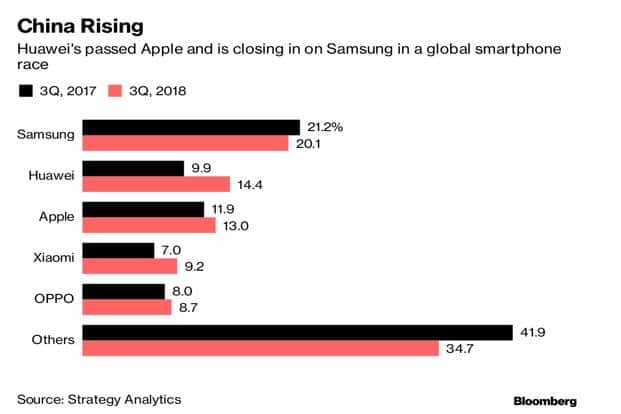 But it’s perhaps Huawei’s newest and splashiest campus in neighboring Dongguan that better encapsulates its ambitions. Overseen by Ren himself, the Chinese company has built a clutch of faux European towns modeled after the likes of Paris and Verona, complete with a lake, castles and bell towers. The complex is so massive employees have to get around by train -- and it’s still expanding.

Yet Huawei has now become a target of scrutiny around the world. While the company is owned by its employees, the founder’s earlier career with the People’s Liberation Army has constantly bred suspicion that it poses a security threat, an accusation it has always denied. Still, several carriers are shunning its equipment over concerns the products may leave a backdoor for Chinese intelligence agencies.

Within China, the U.S.-led effort to exclude Huawei as the world prepares to adopt revolutionary fifth-generation wireless is tantamount to a national affront. The company remains a linchpin in Beijing’s effort to dominate future technologies by 2025 and a 2018 document from the Department of the Treasury showed that Huawei had about a 10th of the essential patents for 5G wireless networks. That would put it in a prime position to capitalize on the billions that will be spent rolling out the technology.

Ren, who survived Mao Zedong’s great famine to found Huawei with four partners in 1987 with 21,000 yuan, said Huawei will continue to engage with governments so they can better understand his business.

He stepped back from daily operations in 2011 by introducing a unique rotation system that allows younger executives to run the company for about six months at a time. But he remained the face of the company on major occasions, such as when he accompanied President Xi Jinping to a Huawei office in the U.K. in 2015. 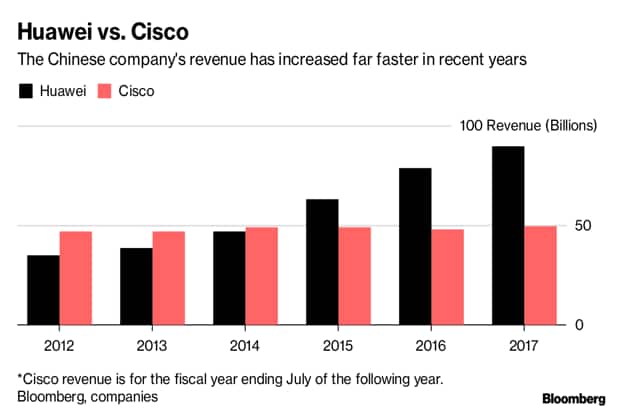 The company’s 2017 report shows he has a 1.4 percent stake, giving him a net worth of $2 billion, according to the Bloomberg Billionaires Index.

Over the past year the accusations have intensified, compounded by his daughter’s arrest as well as the blocking or limiting of Huawei gear in the U.S., Australia, New Zealand and other countries.

“Huawei firmly stands on the side of customers when it comes to cyber security and privacy," Ren said.