Home / Companies / News /  IL&FS wind assets: A good egg in a bad nest
Back
Share Via

IL&FS wind assets: A good egg in a bad nest

Hyderabad: News reports suggest there is ample demand for the renewable energy business of beleaguered Infrastructure Leasing and Financial Services Ltd (IL&FS). Global private equity funds are in the race, The Economic Times reported last week, while The Indian Express said nearly a dozen potential buyers have lined up for the assets.

While such news, typically leaked by merchant bankers, isn’t uncommon ahead of a transaction, the reported interest is understandable. The majority of the renewable energy assets on sale are the 873.5 megawatts (MW) of wind power assets, which have a lot going for them.

For one, these projects have tied up predetermined tariffs with buyers. This makes IL&FS’s wind assets far more remunerative compared to, say, projects being set up from scratch. Predetermined tariffs do not exist any more, as capacities are mostly added through the competitive bidding process; instead, there is a competitive system and recent auctions point to tariffs of less than ₹ 3 per unit. IL&FS’s plants have an average tariff of more than ₹ 5 per unit, the company said in a sale document. The plants are also eligible for a generation-based incentive scheme from the government, which now stands discontinued.

The auction-based capacity addition mechanism, which kicked in last year, has crimped returns of renewable energy projects. As tariffs dropped sharply and execution and operational challenges become more pronounced, investors are giving preference to operational assets with a proven track record, says an industry expert on condition of anonymity.

While IL&FS’s track record on the group’s financial performance and the pace of wind power capacity additions is largely perceived as poor, things are a bit different when it comes to its wind assets. Power generation from these assets grew 9.5% to 1.35 billion units in 2017-18 (FY18). A year ago, in FY17, they together generated a revenue of ₹ 670.7 crore. Current revenues are not available, although a rough calculation suggests revenues of over ₹ 700 crore. 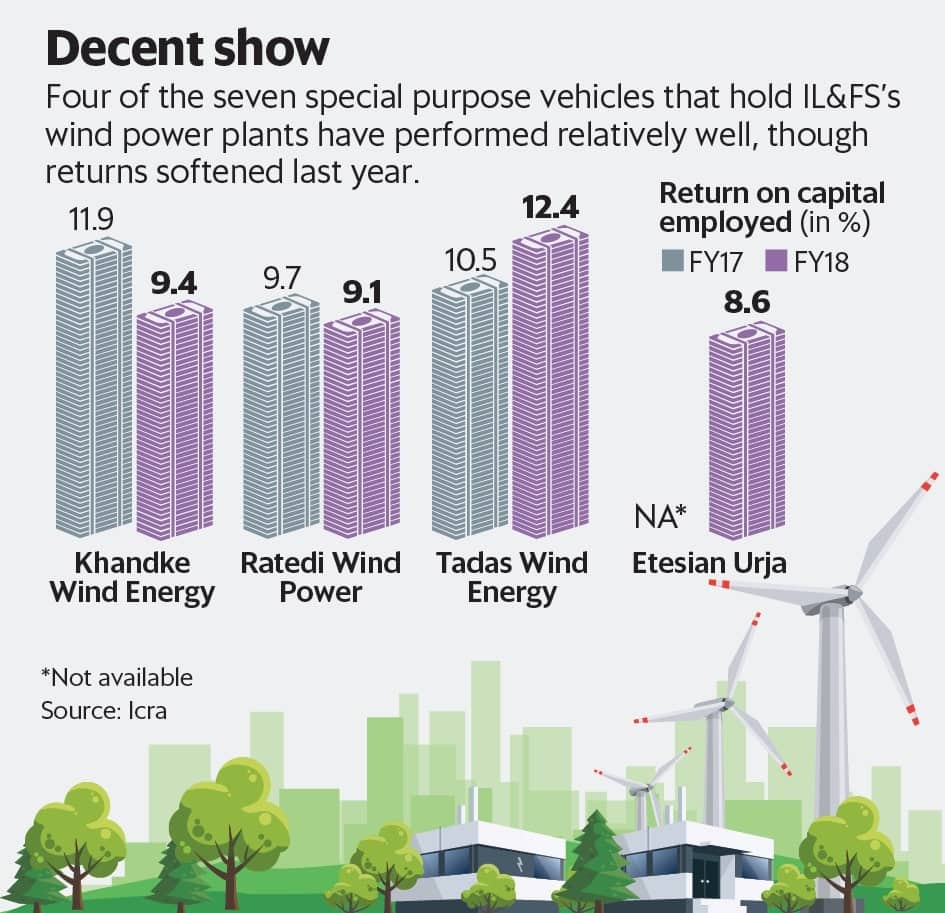 According to Gautam Bafna, founder and chief executive of Wisdom Torch Consulting Solutions LLP, an advisory firm, 85-90% of the reported revenues of wind power plants generally flow into operating profits as they do not have fuel costs. The chart, which has operating profit details for units that run 562MW or 64% of the total capacity, attests to this.

This is based on a review by ratings agency Icra of certain special purpose vehicles (SPVs), under which IL&FS’s wind power assets are held. While there are seven SPVs in all, four of them have been reviewed by Icra. As the chart shows, all four have a positive return on capital.

A separate Icra Ratings note on IL&FS Wind Energy Ltd, the holding company for all wind assets, indicates a decent financial performance as well. “All the seven underlying SPVs are operational and have shown a satisfactory operational track record since commissioning," the note said.

But there are headwinds as well.

All of the assets are not performing uniformly well. A large portion of the capacities was built by the now-bankrupt Wind World (India) Ltd. With a key supplier running into trouble, a significant portion of the plants was starved of service and spares, impacting performance.

While it is not clear how many IL&FS plants were hit due to these reasons, data cited by Icra suggests some plants are lagging on utilization levels.

“The actual PLF (plant load factor) level for 72% of the company’s capacity remained lower than the P-90 level, for assets mainly located in the states of Rajasthan, Madhya Pradesh and Tamil Nadu," Icra said in a note on IL&FS subsidiary Ratedi Wind Power Pvt. Ltd, which has a capacity of 130MW. P-90 predicts what the wind turbine is 90% likely to produce in a year.

Besides, there have been inordinate delays in payments from some states such as Maharashtra and Tamil Nadu, says Icra. If there is further trouble on this front, overeager buyers will be left to twist in the wind.

Some of these concerns might put a check on valuations. Besides, the fact that Japan’s Orix Corp. holds a high stake in the wind assets means that net proceeds to IL&FS will be limited. And if prospective investors cherry-pick, it will impact the valuation of the portfolio, warns an investment banker.

That said, the portfolio offers scope for growth. Around 104MW are at various stages of construction. With the technological advancements in recent years, the new owner can take corrective measures and improve efficiency.

All said, there are enough reasons to suggest IL&FS’s wind energy assets may be the first off the block in the company’s efforts to deleverage.