Mumbai: Local investors rushed to exit equity funds in January and shifted focus to debt in anticipation of a low interest rate regime in the coming quarters.

The rise in stock prices encouraged investors to book profits and shift money to debt schemes because the latter will generate healthy returns when interest rates soften, fund managers said. Clearly, investors are not convinced the stock market will continue to rise, with key indices touching a new high this year.

A 17 January report by Macquarie Securities upgraded Sensex and Nifty (the broader exchange of the National Stock Exchange) targets for the year to 22,200 and 6,900 points, saying that despite a 20%-plus rise in the indices over the past 12 months, the markets, currently trading at around 13.6 times future earnings, are valued at below their 10-year average.

A 15 January Deutsche Bank AG report set the year-end Sensex target at 22,500 points, implying a 14% return from the current level and continuing the positive momentum seen since September.

There were 44 AMCs managing at least ₹ 7.86 trillion in the December quarter and 35-40% of the assets were in equities. Between April and December, investors pulled ₹ 10,816 crore out of equity assets, the second highest redemption in the first nine months of any fiscal year.

In the same period of the previous year, their net investment was to the tune of ₹ 3,596 crore.

“More investors are investing in debt than ever before," said Sundeep Sikka, CEO, Reliance Capital Asset Management Ltd, the second largest AMC in India that managed an average of ₹ 90,636 crore of assets in the December quarter. 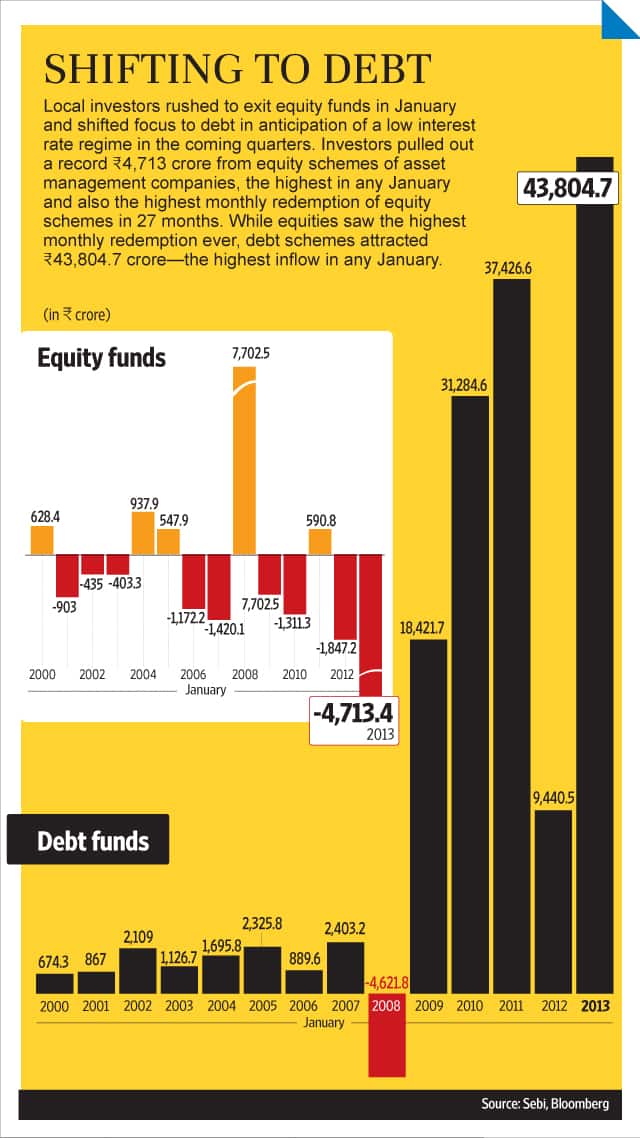 Debt schemes invest mostly in commercial paper, certificates of deposit, pass-through certificates and CBLOs (collateralized borrowing and lending obligations). With the Reserve Bank of India (RBI) signalling the beginning of a low interest rate regime by cutting its policy rate as well as the cash reserve ratio (CRR), or the portion of deposits commercial banks need to keep with RBI, debt-oriented mutual fund schemes are becoming more attractive than bank deposits.

“Investors are booking gains in equities and are likely to return after a correction," said Srividhya Rajesh, vice-president-equity at Sundaram Asset Management Co. Ltd. “Also, if interest rates come down, there will be less incentive for them to look at options like fixed deposits." The fund house managed an average of ₹ 14,595 crore of assets in the December quarter.

Some AMCs are giving 14% annual return on debt schemes, while bank deposits maturing in one year are offering around 9%.

“Investment in debt is driven by expectations of lower interest rates. Generally, when rates fall, we see higher inflows into debt and that is what is happening," said the CEO of a domestic mutual fund which is among the top five fund houses in terms of managed assets. He spoke on condition that neither he nor his firm be named.

“With the markets touching 20,000, investors booked profit, which led to redemptions from equity schemes, something they could not do in the past. Some debt schemes under monthly instalment plans have given up to 12% returns in the past three years. So it makes sense to allocate some more money in debt-oriented schemes," said Sikka of Reliance AMC.

The chief investment officer of a large domestic fund house cited another reason for the redemption in equity schemes—investment in the government’s ongoing divestment issues.

On 1 February, state-run Oil India Ltd raised at least ₹ 3,000 crore through an offer for sale issue on the stock exchanges. “No new money is coming into equity. In the coming weeks, more public floats under the government’s divestment plan are coming. Many investors have sold their units in mutual funds in anticipation of these issues," the officer said, speaking on condition of anonymity.

“There has been a substantial increase in interest for fixed income mutual funds (especially among high net worth individuals)—a reflection of the growing awareness of the category. Over the last year or so, corporate bond funds focused on high coupons had seen increased flows. In recent months, there has been a shift in favour of long bond funds with relatively higher maturities (both gilts and corporate bonds), as investors were looking to take advantage of the expected fall in interest rates. On the equity side, sharp rallies have resulted in profit booking in equity funds while periods of market corrections have seen positive net flows," Vivek Kudva, managing director, India and central and eastern Europe, Middle East and Africa, Franklin Templeton Investments, said.