New Delhi: Wednesday’s launch by Renault India Pvt. Ltd of the Duster, originally an Dacia product, will throw open an entirely new segment, the compact sports utility vehicle (SUV), to Indian consumers who, thus far, only had an option of graduating from a hatchback (industry lingo for small car with a fake boot) to an entry-level sedan (or three-box car as the industry calls these because of the separate compartments for engine, body and boot). 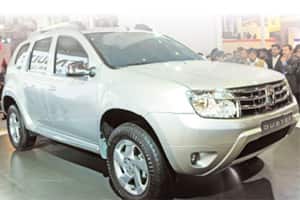 Such SUVs are normally less than 5 metres long, have an engine displacement of up to 1.6 litres and seat five.

Dacia is a Romanian car manufacturer that was acquired by Renault in September 1999.

“We are making sure that the customers get value for money," Mitra said. “We are aiming at sedan buyers as we think they always wanted to buy an SUV but SUVs have traditionally been expensive, so they could not buy them. So we are trying to match expectations of sedan buyers."

He said the car will be available with a 1.6 litre petrol engine and a 1.5 litre diesel engine.

General Motors India’s president and managing director Lowell Paddock told Mint on the sidelines of a press conference last week his company finds the compact SUV segment exciting, but that it is yet to take a call on launching a product in India. 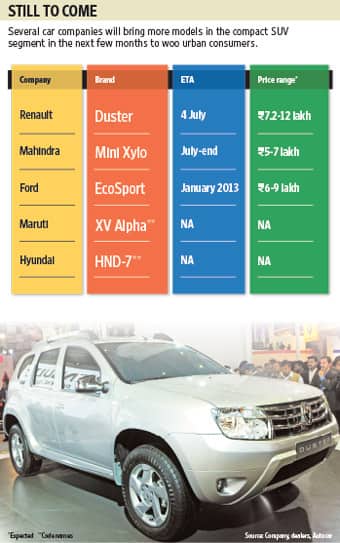 Maruti Suzuki, which launched the multi-purpose vehicle Ertiga during the Auto Expo in January this year, also displayed a five-seater concept SUV at the venue. This SUV, expected to hit Indian roads in the next two years, is the company’s first attempt in years to look beyond the Gypsy and the Grand Vitara. South Korean rival Hyundai Motor India Ltd is also working on a concept compact SUV, code-named HND-7.

An analyst said it would be incorrect to surmise these vehicles would create a new segment in terms of seating capacity. “We have had the likes of such five-seater SUVs such as the Captiva (GM), Vitara and CR-V (Honda). We have also had soft tops like Gypsy (Maruti). So, this concept is not new," said Mahantesh Sabarad, senior vice-president (equity research), Fortune Equity Brokers (India) Ltd. “But in terms of pricing, it’s a new segment. These cars are expected to be priced in the sub-Rs 10 lakh category, which has a lot of sedan buyers wanting to own an SUV."

Most of these vehicles are either available only in diesel versions or have variants that run on the fuel. Given the price differential between that fuel and costlier petrol, more would-be sedan buyers may be encouraged to look at compact SUVs.

A market researcher gave credit to market leader Maruti Suzuki for creating the segment. “Ertiga has broken that barrier in a customer’s mind that there is also an option to graduate to a compact utility vehicle rather than an entry level sedan," said Pradeep Saxena, executive director, TNS Automotive, a marketing research firm. “But the new entrants have to keep in mind that Ertiga is a nine-seater and caters to both personal and commercial segments. So, they have to identify their consumers very carefully."

Ertiga sells around 6,000 units a month in the personal as well as commercial segments.

Still, the compact SUVs will appeal to a very different audience, said a Ford executive.

“It is a wonderful segment. It’s like a magnet," said Nigel Wark, executive director (marketing, sales and service) at Ford India. “Everybody wants to be rugged. It is more of an urban phenomenon. It will attract consumers from across... like people looking to upgrade or a sedan owner looking to buy an SUV just for the sheer pleasure of driving."

And because of their emphasis on fuel economy, such compact SUVs will attract a lot of first-time buyers, added Wark, who insisted that his company would look at EcoSport as a mass product. “For us, it is not a niche product. Rather it will be our next volume product after Figo."

Another aspect that will drive sales in the segment, said Saxena of TNS Automotive, is the size of such vehicles.

“Bigger SUVs require larger space and are priced higher. Moreover, they also sell in the taxi segment that affects a consumer’s mindset. But compact SUVs are unlikely to have such issues."

A little over one in five of the 2.5 million passenger vehicles sold in India are utility vehicles, according to a report by Deloitte Touche Tohmatsu India Pvt Ltd. Out of this, 11% are SUVs such as the Mahindra Scorpio and the Tata Safari. The rest are utility vehicles such as Maruti Suzuki’s Eeco and Tata Motor’s Ace.

The number of SUVs on the roads will continue to rise, according to Fortune’s Sabarad. “In the next five years, the segment is expected to grow at a compound annual growth rate of 15-18%."

Interestingly, for the first time, market leaders Maruti and Hyundai will not be present in the segment and the first-mover advantage will be with Renault. And then with Ford and GM

The question analysts are asking is: can these companies capitalize on the opportunity?