Bangalore/New Delhi: Flipkart, India’s biggest online retailer, said on Tuesday that it had received as much as $1 billion in fresh capital, illustrating its appeal to global investors and piling pressure on rivals to keep up with the company in attracting funds.

The money was raised from existing investors including Tiger Global, Naspers and Government of Singapore Investment Corp., the city-state’s sovereign wealth fund.

“This is a big milestone not just for Flipkart, but for Internet firms in India in general," chief executive officer Sachin Bansal told reporters.

“We believe India can produce a $100 billion company in the next five years, and we want to be that. Whether it takes 5 or 10 years, we are here for the longer term."

Flipkart was valued at nearly $7 billion in the latest round of fund raising, more than double the $2.6-3 billion valuation it received in its last round in May, according to two people familiar with the matter.

The sheer size of the latest fund raising puts pressure on rivals Snapdeal, Shopclues and Jabong to attract hundreds of millions of dollars just to survive, especially as the world’s largest online retailer Amazon.com Inc. is fast expanding in India after it launched in June 2013, analysts said.

Snapdeal is in discussions to raise fresh funds, partly from new investors, and may close the round by the end of the year, two other people with direct knowledge of the matter said. The company, owned by Jasper Infotech Pvt. Ltd, is looking to raise at least $100 million in the next round, one of the people said.

Snapdeal, which already raised $233.7 million this year from eBay Inc., BlackRock and others, declined to comment.

“Flipkart has been continuously raising large amounts of capital and I think that is at least partly in response to Amazon’s aggressive expansion," said Sanjeev Krishnan, leader, private equity, PricewaterhouseCoopers India. “You need to keep investing in operations, supply chain, marketing, enhancing awareness, and improving the technology platforms, and this requires significant capital. Amazon has significant resources at its disposal and it will take a lot of money for Flipkart, Snapdeal and Jabong to battle with it. After Flipkart’s $1 billion raise, I think there will be pressure on others to raise cash."

Amazon launched its India marketplace in June 2013 and has quickly expanded its product selection to become the biggest rival to Flipkart and Snapdeal. Mint reported on 26 June that Amazon had increased the capital it can invest in India to as much as ₹ 1,500 crore in December from ₹ 200 crore in 2012-2013, citing documents filed with the Registrar of Companies. 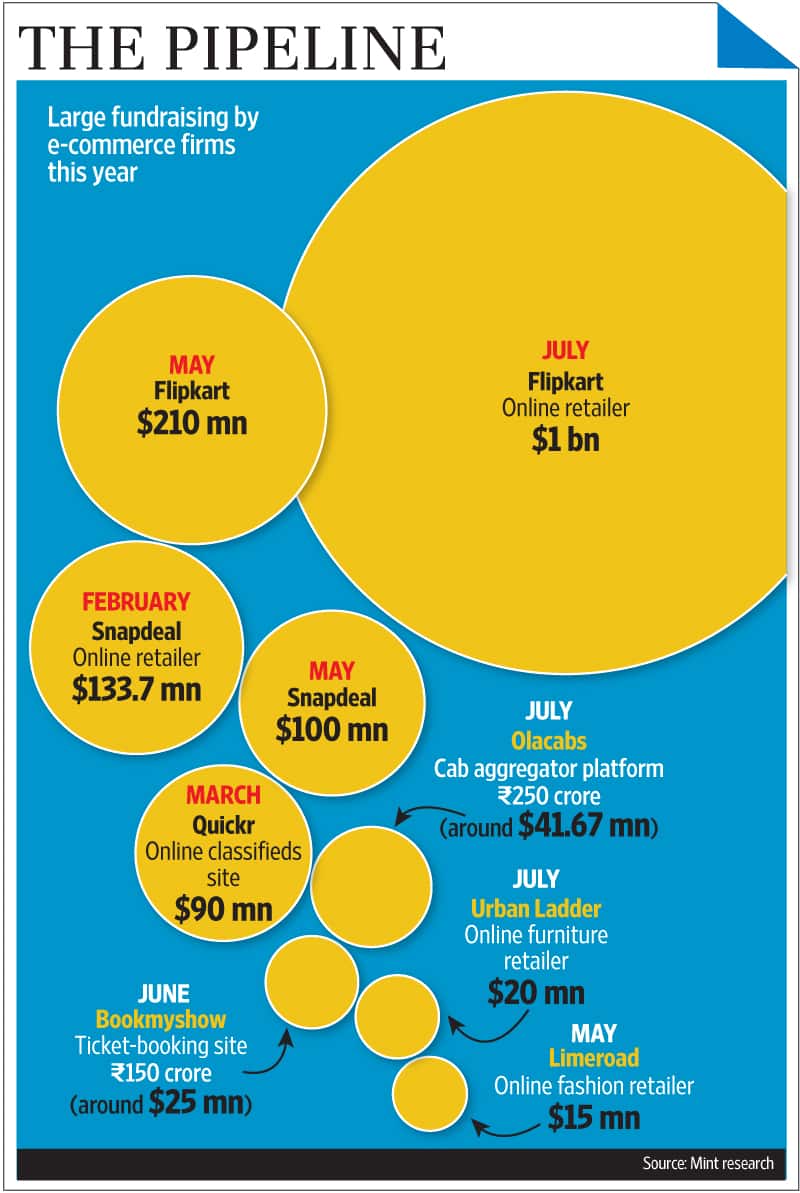 “Given the way everyone is raising money, I think I will have to de-prioritize building strategies around how to run the business and focus more on chasing investors," the executive said on the condition that neither him nor his firm would be identified.

With the latest fund-raising, Flipkart has received $1.78 billion since it started out in 2007, including $1.57 billion over the past year. It raised $360 million last year in two rounds, even as investors were steering clear of most e-commerce firms, and followed that with a $210 million fund raising, mostly from DST Global, in May.

DST Global is owned by Russian billionaire Yuri Milner, a serial e-commerce investor who has bought stakes in companies including US-based Facebook Inc. and Twitter Inc. as well as China’s Alibaba Group.

Two of the company’s existing backers, Tiger Global and Naspers, led the latest round, which also had Accel Partners, Iconiq Capital and DST Global among the investors.

The fund-raising is a “sign that there is a large amount of international confidence in Indian e-commerce and has set a new benchmark for the rest of the industry", said Ashish Jhalani, founder at eTailing India, an e-commerce consulting firm. “It also indicates that Flipkart may be growing faster than what was estimated earlier and as such the valuation has changed significantly between last round and this round."

Flipkart is the leader in India’s fast-growing e-commerce market, valued at $3.1 billion by brokerage CLSA, ahead of firms such as Snapdeal, Shopclues and Jabong.

The company said in March that it pulled in monthly gross sales of over $83 million. Snapdeal is estimated to have more than half of Flipkart’s gross sales—value of goods sold on the site. The websites get to keep a cut of the gross sales.

Flipkart will use the funds to expand its logistics network, build more warehouses, spend on marketing and discounts and acquire companies.

“The guys in the horizontal space will have to be in the market to raise more capital to compete with each other. So, if you are a horizontal marketplace and you have to compete with Flipkart, how will you survive without raising capital?" said Mukul Arora, vice-president at venture capital firm SAIF Partners.