Mumbai: Online banking and automated teller machines (ATMs) are more popular than ever, but as with most things Indian, retail customers still seek comfort and security in traditional bank branches.

Business per branch for commercial lenders increased sharply last year, according to the Reserve Bank of India’s (RBI) annual report for 2007-08, as banks opened more branches and added new products to attract customers. 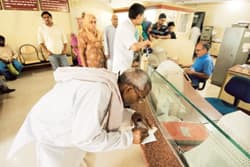 Comfort zone: A Punjab National Bank rural branch in Rohtak district of Haryana. RBI has recently made it mandatory for all banks to accept cash over the counter rather than forcing customers to use ATMs only. Harikrishna Katragadda/Mint

In the previous fiscal year alone, despite their aggressive promotions of alternative banking platforms, ICICI Bank Ltd and HDFC Bank Ltd, the country’s two biggest private lenders, doubled the number of their branches, including those from acquisitions of smaller banks. State Bank of India (SBI), the country’s largest, added nearly 1,000 branches to cross the 10,000 mark.

Bank branches in semi-urban areas dipped nearly 2% to 12,438 from 12,649 earlier, and increased marginally in rural areas to 30,732 from 30,461, but these figures do not reflect the true picture as some of the regional rural banks as well as cooperative banks were closed.

“Even as we see increased transactions on alternative channels, convenient branch locations continue to play a key role for business banking customers,’’ said an official with ICICI Bank, who didn’t want to be identified. The bank increased the number of its branches to 1,425 last year from 475 earlier.

The increasing number of bank branches has clearly resulted in more business as seen over the years. Business per branch for private banks increased to Rs133.16 crore in 2006-07 from Rs4.87crore in 1991-92, and for public sector banks to Rs66.83 crore from Rs8.93 crore, according to RBI data. For foreign banks, business per branch rose to Rs1,004.10 crore from Rs149.96 crore earlier.

Entertaining customers at bank branches, however, is expensive. A transaction executed at an urban branch costs a bank around Rs40, and could go up to Rs70 in the metros because of high real estate costs, said an executive with a private bank on condition of anonymity.

An ATM transaction, on the other hand, could be as low as Rs18 if it attracts a sufficient number of customers.

“Alternative channels do exist, but are restricted to basic functions like payment of utility bills," said a senior executive with a private sector bank on condition of anonymity. “Transactions that are financial in nature like cash deposits, loans and deposit mobilization require brick and mortar offices.’’

Private banks said more than 70% of transactions were conducted on alternative channels, mostly for cash withdrawals, checking balances and electronic clearances for regular payments. But customers were still wary of using these platforms for so-called core banking functions.

“Recent instances of phishing and the increasing number of bank customers have put pressure on the alternative channels," said a senior SBI executive, who declined being named.

“Not many customers are comfortable conducting large- value transactions on alternative channels and prefer to come to the branches,’’ he added.

Customer complaints about being forced by banks to use ATMs for cash deposits had RBI recently making it mandatory for all banks to accept cash over their branch counters as well.

The banking regulator also objected to banks including clauses that forced customers to deposit cash only through ATMs.

His bank has applied for licences to open about 200 branches in 2008-09, significantly higher than the 120-130 branches it launches every year, he added.

The private bank currently has about 710 branches and 3,000 ATMs.