Mumbai: Reliance Industries Ltd (RIL) is expected to post a decline in net profit for the three months ended June from a year earlier, as its hydrocarbon exploration and production (E&P) and crude refining businesses remain weak.

If the forecasts prove right, the Mukesh Ambani-controlled firm will see a dip in net profit for the third straight quarter on a year-on-year (y-o-y) basis. On a sequential basis (quarter-on-quarter, or as compared with the preceding three months), net profit will rise on the back of a weak rupee, better margins in the petrochemicals business and other income. 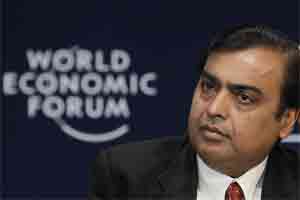 RIL posted a y-o-y decline in quarterly net profit for the first time in the December 2011 quarter. The trend has continued since.

A struggling global economy and domestic challenges such as falling gas output from the D6 field in the Krishna-Godavari (KG) basin, billed as India’s largest gas find, are the primary reasons for the weak results.

RIL has been assured of speedy clearances by the oil ministry for some of its wells in the D6 field and its Mahanadi basin block, a ministry statement said on Tuesday, signalling a softening of its stand. In turn, it was “requested to make all records and accounts of the KG-D6 block available to CAG (Comptroller and Auditor General of India) as provided for in the production-sharing contract", the statement said.

Brokerage firms’ reports expect RIL’s net profit to improve sequentially because of a global rebound in petrochemical margins and the rupee’s depreciation against the dollar, which would help boost export income. In 2011-12, 61% of RIL’s revenue came from exports. The rupee declined 8.56% against the dollar in the June quarter, according to Bloomberg.

Like in previous quarters, a high level of non-operating income (mostly through treasury operations) is also expected to boost the company’s net profit in the June quarter.

“We estimate RIL to report (an) Ebit (earnings before interest and tax) of ₹ 5,200 crore, implying growth of 7.9% q-o-q (quarter-on-quarter), however down 24.5% on a y-o-y basis," Morgan Stanley analysts Vinay Jaising and Rakesh Sethia wrote in the report.

The sequential decline in GRMs, along with lower oil prices and a q-o-q improvement in petrochemical spreads, was characteristic of the oil and gas industry in general over the April-June period, according to Morgan Stanley.

Analysts Niraj Mansingka, Kiran Tulasi and Kunal Gupta of Edelweiss Securities Ltd wrote in a 4 July report that they expected RIL’s GRM to slip to $6.8 per barrel from from $7.6 in the last quarter of fiscal 2012 “due to the correction in gasoline margins".

RIL has traditionally enjoyed a healthy premium over the benchmark Singapore GRM due to its advanced refinery in Jamnagar, Gujarat, which can use dirtier and cheaper crude to yield the same product slate that other refiners make using more expensive and cleaner crude. However, in the December and March quarters of fiscal 2012, RIL lost this edge as its GRM slipped below the benchmark.

Brokerage firms such as Morgan Stanley expect RIL to regain a $0.4 per barrel premium over the Singapore GRM in the June quarter. “RIL’s refining throughput is likely to improve sequentially, as last quarter (January-March), it had a three-week shutdown at one of its CDUs (crude distillation units) of the SEZ (special economic zone) refinery," the Morgan Stanley report stated.

Analysts say RIL’s E&P business is going to be a continuing drag on the its overall numbers.

Gas output from D6 is likely to average around 32 million standard cubic metres per day, Morgan Stanley and Edelweiss analysts estimate, down 10% sequentially and 41% y-o-y.

The weak rupee is likely to help moderate the impact of the decline, given that RIL sells its oil and gas at dollar-denominated prices.

With petrochemical margins improving in Asia by around 48% from a record low of $254 per tonne in the March quarter, due to falling naphtha prices and maintenance shutdowns in some parts of the continent, Morgan Stanley expects RIL to post a 7% y-o-y and 9% sequential improvement in operating profit from the business.

The company, which had ₹ 70,252 crore of cash and cash equivalents at the end of March, is expected to continue benefiting from returns on this amount through its treasury operations. Morgan Stanley expects RIL to report other income of ₹ 1,601 crore for the June quarter, 48.5% higher over a year ago. The expected other income, however, is 30.2% lower than the preceding quarter.

“RIL’s other income has been bailing it out by making up for the shortfall in operational earnings to an extent, and the trend is likely to continue in the June quarter as well," said Jagannadham Thunuguntla, head of research at SMC Global Securities Ltd.

However, considering that RIL is stepping up efforts on its share buy-back programme, the contribution of other income to profit will gradually decrease over the coming quarters, he added.

“If its operational numbers don’t improve by then, RIL’s overall profitability will get impacted," said Thunuguntla.

The Morgan Stanley report stated that since the beginning of a share buy-back programme on 7 February, RIL has bought back 33.8 million shares, estimated to have cost the company around $434 million.