The car will be available in both petrol and diesel options and will take on Maruti Suzuki’s DZire and Toyota Kirloskar Motor’s Etios. DZire is currently available between ₹ 4.88 lakh and ₹ 7.35 lakh, while Etios is sold at ₹ 5.14-8.23 lakh.

While the petrol variant powered by a 1.4 litre engine is priced at ₹ 5.27 lakh and ₹ 5.49 lakh for the two options, the diesel variant coming with 1.5 litre engine has three options priced between ₹ 6.26 lakh and ₹ 7.14 lakh.

“We have tripled Verito volume in the last two years. In the last fiscal we sold 18,000 units of the car and this year we are looking to outperform the industry growth," Mahindra & Mahindra chief executive (automotive division) Pravin Shah told reporters here.

The new Verito is more expensive by ₹ 7,000 to ₹ 19,000 across different variants than earlier model. 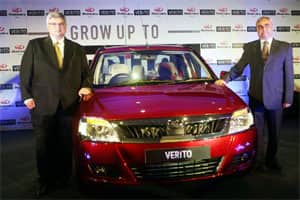 M&M had taken licence from its erstwhile joint venture partner Renault to manufacture and sell sedan Logan in the Indian market when their association ended in 2010. Later, in April 2011 the company had relaunched the car and renamed it as Verito.

The Indian auto major is currently working on a sub-four metre version of the Verito which will qualify for the excise duty benefit given on small cars.

He declined to comment on whether M&M would develop new car models based on the Verito platform.

Commenting on the company’s SUV model XUV500, Shah said since the company reopened bookings in June, it has received over 22,000 orders.

M&M will be enhancing the output of the vehicle at its Chakan plant to 5,000 units a month by September-October from the current levels of 4,000 units per month.

On exports, Shah said M&M plans to start shipping XUV500 to markets in Europe, South and Central America within this fiscal. Already the company is exporting to South Africa and Australia.