Kolkata: Kishore Biyani, the founder and chief executive officer of the Future Group, will merge his real-estate business with that of Kolkata-based developer Sumit Dabriwala, who will take control of the new entity. 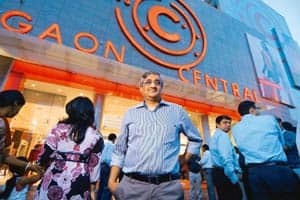 “The process of creating a merged entity has begun," said a Future Group official who declined to be named. “Sumit would be responsible for its day-to-day management."

Kishore Biyani’s cousin Sunil Biyani will also join the board of the merged entity, and will be working closely with Dabriwala, he added.

The board of the Future Group flagship Pantaloon Retail (India) Ltd decided on 23 April to turn its real estate and mall management businesses into a separate subsidiary in preparation for their merger with UCBG.

When contacted, Dabriwala, a director of UCBG, said: “At this point, only two things are clear: that I will be leading the business and that Mr (Kishore) Biyani would be mentoring it."

The Economic Times newspaper had reported on Monday that the two would join forces to create a real estate firm that will have interests in both commercial and residential projects.

“For the Future Group, its real estate business was too small compared with its other interests; and for us, it was our drive to expand nationally that led to this decision to integrate our businesses," Dabriwala added.

Currently, Dabriwala only has interests in residential projects in Kolkata and its suburbs, while the Future Group has investments across India in commercial projects.

The two have been acquainted with each other for a long time, and the decision to integrate the businesses was taken at a breakfast meeting at Biyani’s home in Mumbai, the Future Group official said.

Assets held privately by Biyani are also going to be transferred to the merged entity, Dabriwala said, adding that he had begun the process of consolidating his real estate assets, which are currently shown on the books of different unlisted companies.

Together, Biyani and Dabriwala are likely to hold at least 50% in the merged entity, according to the latter, though it isn’t immediately clear how much they would own separately.

The rest will be held by Pantaloon’s minority shareholders and Yatra Capital Ltd, a Euronext-listed private-equity firm that invests in Indian real estate projects, which bought a 50% stake in one of Dabriwala’s firms for Rs117.6 crore in December 2007.

Dabriwala’s key asset is his 262-acre residential project at Batanagar near Kolkata, where footwear manufacturer Bata India Ltd has a factory.

UCBG firm Riverbank Holdings Pvt. Ltd and Bata currently hold 50% apiece in a special purpose vehicle developing the project, but the latter recently agreed to sell its stake for Rs100 crore in cash and 640,000 sq. ft of “developed space", which will be used to provide housing to employees.

The integration of the two businesses could take up to six months, according to Dabriwala, because it would involve “the merger of several unlisted companies and transfer of assets from privately held companies".