Home >Companies >We anticipate a dramatic slowdown of inflows into Asia

We anticipate a dramatic slowdown of inflows into Asia

We anticipate a dramatic slowdown of inflows into Asia

Mumbai: In October 2008, Clive McDonnell, head of equity strategy at BNP Paribas Securities (Singapore) Pte Ltd, had predicted that India’s bellwether stock index Sensex could drop to 9,500 when it was veering around 12,500. It actually dropped even lower. Early last year, he put India ahead of China as a destination for investors and received a lot of flak for that—but he was proved right. 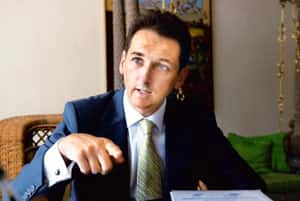 Timing key: Clive McDonnell says the ‘sell in May and go away’ view may be applicable this year. Abhijit Bhatlekar / Mint

In an interview with Mint on Wednesday, McDonnell said foreign fund flow to Asia will drop dramatically to $6.8 billion (Rs30,192 crore) this year from $45 billion last year. Edited excerpts:

In October 2008, you were terribly bearish. Have you changed your views?

The times were different—very bearish. We were quite negative at that point of time. The reasons were very valid in terms of the global recession and the impact of the whole liquidity crisis on the market. The fiscal situation was bad and deteriorating then. There were concerns about the credit rating then and it is now improving.

You were one of the first to reverse your bearish stance.

For some time now, we’ve been very positive about the Indian equity market. It’s not that we singled out India...It goes back to the region, when we saw the turning point in terms of lead indicators. That’s when we came off positive on prospects of Asia overall and given our views that fund flows will improve, we felt that liquidity will trump concerns about the fiscal side.

The fiscal side was continuing to deteriorate. We advised clients to reduce exposure to China and switch to India. The main push-back was really in terms of valuations. The consensus view was that India trades at a significant premium relative to China.

How did you tackle this?

Historically, India traded at a price-to-book multiple of 1.4 times. India has been trading higher and that is a fact of life. In September last year, India was outperforming China. It is reflected in data now…It is something that we anticipated. China’s credit growth was 60% and you don’t need to be an economist to know that it is not sustainable...

Where do you see the Sensex in a year?

We see the Sensex at 21,400 (points) by the end of year (March 2011). This year, the big calls are behind us. The time for that was last April when you made country calls. We are now emphasizing on sector and company views.

We are advising investors to move out of Indian banks towards Chinese banks. Strategies like these will add value and not the 21,500 level of the Sensex. Alpha will be generated from such sector-specific strategies. In terms of markets, Japan is our preferred market today.

What is your forecast on inflows to India?

We don’t forecast inflows into India. What we do is to forecast on inflows into the region. Based on the EPFR Global data, we forecast $6.8 billion (portfolio funds inflow into Asia) and to put that number in perspective, last year’s flow was $45 billion. So the bottom line is: we do anticipate a dramatic slowdown of inflows into Asia this year. But the number still remains positive and that’s key to achieving positive returns in the market.

Very simple. The strength of the dollar. A stronger dollar historically has a link with fund flows towards international equities, of which emerging markets are a subset. Our forecast is a 10% rise in the dollar and that’s really the primary factor that drives the fund inflows into any market. If you look at the data, January-February were very weak months (in terms) of fund inflows; March was sideways; April is a fair bit mainly because of the recovery in the euro. If we see $5 billion inflows in May, the old truism of “sell in May and go away" may be very applicable this year. Because in terms of fund inflows, the key drivers (of the markets), the majority is expected to arrive by May.

You expect $6.8 billion of portfolio flows into Asia. How much of this would come to India?

It’s a tricky question. We don’t forecast individual country compositions. India would capture a share that would be be a touch above its proportionate market cap weight in the region because China is not going to capture the full amount due to diminished expectations for that market. Our best assessment is that about 15-20% of these flows might come to India.

What is the downside if people sell in May and go away?

What’s your take on the initial public offerings (IPO) pipeline?

This is definitely a concern for clients. We have analysed this. The takeaway from the fourth quarter is that it’s a sector-specific issue and not an issue for the broader market. The pipeline is quite concentrated in individual sectors.

We estimate that 75% of these IPOs would come from the metal and mining and telecom sectors. The public issues that came out in the fourth quarter were concentrated in the utilities space.

Utilities underperformed last year. It did not act as an overall drag on the market because utilities are less than 5% of the index. Therefore, there will be a drag on individual sectors. The placement pipeline will not overwhelm the equity markets.

Do you expect a tightening of monetary policy by the central bank?

Absolutely. We expect rates to rise by up to 100 basis points this year. Ultimately, we believe the Reserve Bank of India is moving to tightening monetary policy because growth is solid. The equity market is focused on the growth side of the equation rather than the inflation side of the equation at the moment. But we do expect inflation to peak in the next two months or so and decline thereafter.