Mumbai: One key reason for Cyrus Mistry’s sacking was the displeasure of Tata Trusts in not receiving enough dividends on their shares. On Tuesday, V.R. Mehta, trustee at the Sir Dorabji Tata Trust, which holds a 27.98% stake in Tata Sons, said as much in an interview to NDTV.

However, a look at Tata Sons’s filings with the Registrar of Companies shows that the firm’s dividend distribution has been steady. It distributed Rs283 crore as dividends to ordinary shareholders in each of the fiscal years from 2008 to 2010. From fiscal 2011 to fiscal 2016, the dividend paid has been Rs323 crore, except for one year. In fiscal 2015, Tata Sons gave out Rs647 crore to shareholders because of a special dividend received from Tata Consultancy Services Ltd (TCS), where it holds close to 73.5%. 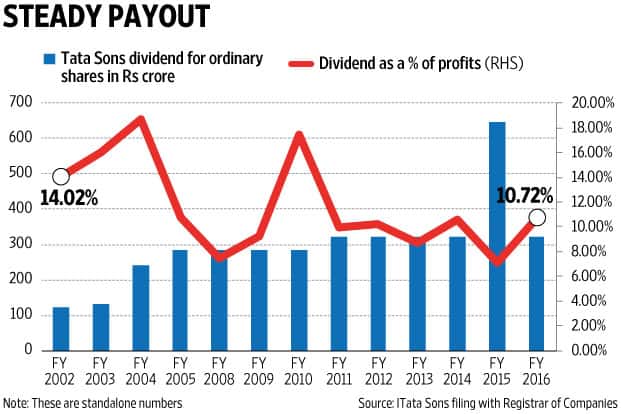 “The trusts were concerned about falling revenue (since Mistry took over)—funds for charitable work were drying up," Mehta told NDTV. “The trusts are dependent for philanthropic activities on dividends on shares we hold. The performance of Tata Sons was becoming more and more dependent on just 2 companies—TCS & JLR (Jaguar Land Rover)."

Earlier this year, the Trusts withdrew Rs3,951 crore by redeeming preference shares they held in Tata Sons, according to the latter’s directors’ report for 2015-16. These shares were redeemed about 10 years before maturity.

What about dividends earned by Tata Sons from its holdings in key Tata operating companies?

Still, the compound annual growth rate of dividends received during the Mistry years was 18.1%, a slowdown from the 21% growth in the four preceding years when Ratan Tata was chairman.

The contention that the group was increasingly dependent on TCS and JLR is true to a certain extent, but it is a matter of degree. 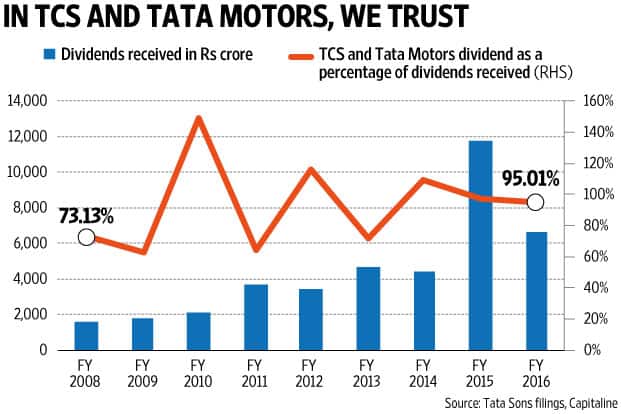 Sir Ratan Tata Trust, Sir Dorabji Tata Trust and a clutch of other Tata family member-endowed trusts together are called Tata Trusts, which own a collective two-thirds in Tata Sons. Tata Trusts gave itself special powers in nominating, approving and removing chairmen of the group holding company—just days before Cyrus Mistry took the top job in December 2012.