Mumbai: Shares of Naresh Goyal-led Jet Airways (India) Ltd plunged to their lowest in nearly four years on Friday amid investor worries after a survey by tax authorities at its offices in New Delhi and Mumbai.

The sharp decline in shares adds to woes of the financially-beleaguered airline, which is battling higher costs largely as a result of rising jet fuel prices and a weaker rupee.

The Naresh Goyal-controlled airline had also come under the scanner of the civil aviation ministry, which ordered a probe on Thursday after a flight that took off from the Chhatrapati Shivaji International Airport in Mumbai for Jaipur that day had to return as several passengers suffered nose and ear bleeding. 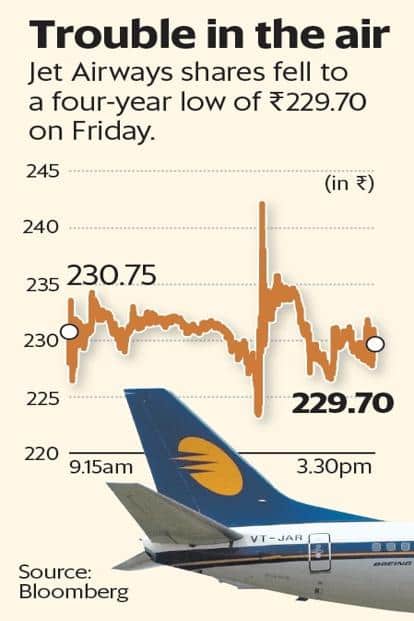 “The income-tax department is conducting a verification survey at Jet Airways’ offices under Section 133A of the Income Tax Act," a tax official said.

“This is not a raid. We are just verifying if there has been certain falsification of expenses, or any other suspicious transactions," the official added.

“The company is fully cooperating with the authorities and is responding to the queries raised by income tax authorities," the airline said in a notice to the exchanges.

Rising jet fuel prices and a weakening rupee have swelled operating costs of Indian airlines as a majority of payments are dollar-denominated.

While the domestic aviation sector faces headwinds, Jet Airways, which is essentially a full-service carrier, also faces stiff competition from budget airlines, which operate on a comparatively lower cost model.