While passenger car sales were flat, overall passenger vehicle sales that include cars, utility vehicles and vans grew 1.82% to 240,979 units

New Delhi: Automobile sales in November declined for the first time in 11 months as the government’s decision to ban high-value bank notes depressed demand for commercial vehicles and two-wheelers.

Total sales fell 5.48% during the month, the steepest decline since March 2013, according to data compiled by lobby group Society of Indian Automobile Manufacturers, or Siam. 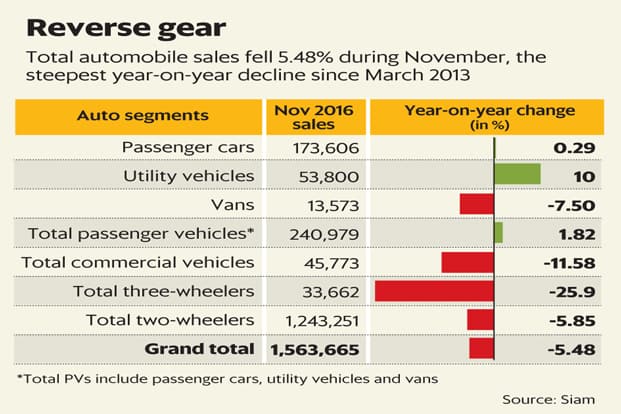 To be sure, Siam reports wholesale figures and the numbers may not reflect the actual impact of the currency ban. The actual impact on retail sales will be visible in the coming months when dealers will look to clear inventory built during the festive season that ended with Diwali on 30 October.

Except for some companies such as Maruti Suzuki India Ltd and Toyota Kirloskar Motor Pvt. Ltd, who have a long order book because of new model launches, others are expected to report a decline in sales. The decline in car sales is expected to be as much as 30% at the retail level, the percentage of cars that are bought through cash payments.

In two-wheelers, where most purchases happen through cash payments, sales have taken a massive hit. An indication of that was visible in sales figures of Hero MotoCorp, which sold 480,000 units in November, a massive drop from the average of about 600,000 units that it sells every month.

“Looking at the current retail trends, the growth for this fiscal year might either be single digit or flat. We hope not to see a negative growth," Abdul Majeed, partner and auto practice leader at PricewaterhouseCoopers, said, in a note. “The negative impact in retail sales will be seen in the coming months and the two-wheelers, commercial vehicles and SUVs will see a significant de-growth in the short term," he said.

“Though conversion from demand to sale has come down but basics of the economy are strong. There will be good agricultural income and the Reserve Bank of India will come under pressure to reduce interest rates. Once that happens, we will see demand getting back on track," said Vishnu Mathur, director general, Siam.

India’s GDP growth in the fiscal second quarter accelerated to 7.3% from 7.1% in the preceding three months. The government expects GDP to grow at 8% in 2016-17 on the back of a bumper farm production due to normal monsoon.

After three consecutive years of sluggish performance, India’s auto industry was set for a rebound after posting robust sales in September, when the passenger vehicle sales were the highest in more than four years. The increase in demand for automobiles in the country had prompted Siam to revise its growth projections in August.

Siam estimated passenger vehicle industry to grow in the range between 11% and 13% in fiscal year 2017, as against an earlier forecast of 6-8%.