Bangalore: India plans to seek the help of European jet makers such as Dassault Aviation SA and Saab AB to accelerate the development of Tejas, the indigenous light combat aircraft, replacing project consultant Boeing Co., a scientist involved in the project said.

The move comes after the US plane maker insisted that the Aeronautical Development Agency, or ADA, sign a so-called end-user agreement that would require India to seek US permission to export the aircraft to a third country. 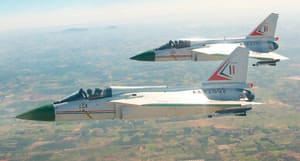 Plane dispute: Tejas aircraft in flight. ADA had sought Boeing’s help in hastening the plane’s development for initial certification by 2010, the deadline for achieving the standards set by the Indian Air Force.

“We have already done 99% of the job, the help (we sought) is just for the remaining 1%," said a senior scientist at ADA, the military plane design agency of the Defence Research and Development Organisation.

The scientist, who did not want to be named because of the sensitive nature of the project, said the agency was yet to decide on a replacement for Boeing.

ADA sought Boeing’s help in speeding up the aircraft development for initial certification by 2010, the deadline for achieving the standards set by the Indian Air Force (IAF). Crucial to this is the Tejas achieving an angle of attack, or AoA, of 24 degree, a measure to prove the agility of the jet at extreme limits of performance.

So far, Tejas has achieved basic standards set by IAF such as reaching 15km in altitude, manoeuvres of 6 g, or six times that of Gravity, speed of Mach 1.6, or 1.6 times the speed of sound, and an AoA of 22 degrees.

Tejas, India’s first homegrown fighter in decades, is a single-engine supersonic fighter that has delta wings and no tail, and uses fly-by-wire technology that enables a pilot to control the plane electronically through on-board computers. “Because of the change in altitude (at 24 degree AoA), it could have an effect on the aircraft characteristics," the ADA scientist said.

Boeing, which makes military planes such as F-15, F/A-18 and F-22 Raptor, said it continues to be in talks with ADA on the development of Tejas, within the prescriptions of US policy.

“Those requirements are set by the US government, in discussions with the government of India and ADA. So any question on export permissions is best directed to the US government," said Brian Nelson, spokesman for India at Boeing Integrated Defense Systems, the plane maker’s military wing.

“These issues will (get) ironed out, given the kind of (military and political) engagements between the two countries," said Ratan Shrivastava, director for aerospace and defence at the India offices of research firm Frost and Sullivan.

Boeing is also in the race for the country’s largest military plane contract of 126 fighter jets that is worth at least Rs42,000 crore, with its F/A-18E/F Super Hornet.

The Hindu reported first on 4 August that Boeing was delaying the Tejas development citing US laws.

This is the second demand in recent times by a US firm that an Indian agency sign the end-user agreement.

On 25 July, Mint reported that the Indian Space Research Organisation would on its own upgrade a semiconductor lab in Chandigarh after International Business Machines Corp. declined, citing concern that the space agency may use the chips designed there to guide rockets and satellites for the military.