DLF Ltd, the country’s largest developer by market value, which runs the luxury DLF Emporio Mall in New Delhi, said it will build two more such projects in the National Capital Region. The two malls, which are expected to be operational by 2013-14, will come up in Chanakyapuri, in the vicinity of the diplomatic enclave, and Gurgaon on the outskirts.

“We are seeing a lot more demand and interest in the Indian luxury market coming from countries like Italy, France, Singapore, United States," said Dinaz Madhukar, vice-president of DLF Emporio, which is fully occupied. “We want to accommodate brands that we don’t have space for now at Emporio." 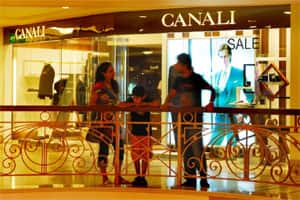 According to the report India Luxury Review 2011 prepared by consulting firm AT Kearney and the Confederation of Indian Industry (CII), the overall size of the luxury market in India was $5.75 billion in 2010 and it’s expected to grow to $14.72 billion by 2015.

Apart from Emporio, UB City in Bangalore and a section of the Palladium in Mumbai are dedicated to luxury brands.

“There is a strong demand for luxury retail spaces, preferably in malls," said Renjhen. “This includes a mix of full-scale luxury developments and a large real estate development with a separate section for luxury brands."

In the south, two high-end retail projects are being set up in Chennai. One is the second phase of the existing Express Mall. Another will be developed by Phoenix Mills Ltd, the developer of High Street Phoenix in Mumbai that’s also home to Palladium, which is building Market City in Chennai that could house luxury brands.

In Mumbai, upcoming projects include one developed by the Wadias of Bombay Dyeing and Manufacturing Co. Ltd and one by the Laker’s Group. According to people in the real estate and luxury retail sectors, who didn’t want to be named, some luxury developments are in the early stages of planning in Chandigarh and Amritsar.

“This phenomenal development of the luxury market is true not only of urban India, but what is remarkable is that tier I and tier II cities are fast becoming hot spots for the global brands," said Kanchan Lall, associate vice- president at Tecnova India Pvt. Ltd, a Gurgaon based consulting firm. “We would soon see such luxury malls coming up in smaller towns with huge purchasing power like—Chandigarh, Amritsar etc."

A lack of sufficient real estate to cater to the luxury retail market has been cited as a factor hindering expansion, but whether the supply of new space will be absorbed remains a question.

“Today, when brands want to expand they do not have enough locations to consider and the ones in development will yet take two-three years to come up," said Sanjay Kapoor, managing director, Genesis Luxury, which markets multiple luxury brands in India such as Burberry, Jimmy Choo and Canali. “We are in the process of bringing in many more iconic brands to India and expanding the presence of our existing brands; the demand is bound to increase."

Genesis has 33 outlets spread across Mumbai, Chennai, Delhi-NCR, Bangalore, Hyderabad and Chennai; it has 80% of its stores in luxury malls and the remaining 20% in five-star hotels.

Rentals have to be “fair and reasonable" for the new luxury retail developments to attract tenants, said Reena Wadhwa, the joint venture partner for Gucci in India.

“Limitation of luxury retail space is currently a serious constraint to the growth and investment potential by global luxury brands. I believe that luxury brands like LV, Hermes, Gucci, etc., will plan their growth and strategy based on these development," she added. LV is short for Louis Vuitton Moët Hennessy.

Renjhen of JLL said an over-supply situation is a possibility depending on the city and the number of stores.

“There could be a potential over-supply situation only in cities where brands are covered through more than one store, barring Delhi and Mumbai, that too depending on the location," he said. “Larger cities can take multiple stores at different locations".

Retailers are hoping the addition of shopping space will lead to a correction in rentals, which in DLF Emporio now range between ₹ 700 and ₹ 1,100 per sq. ft.

“The current monopoly for luxury retail spaces will come to an end eventually and more competition will always result in a price correction. However, we are far from that stage and the difference will never be drastic in a country such as India," said Kapoor of Genesis Luxury.

Brands in India have been experimenting with real-estate options, moving from hotels to malls and even the high street. Last year, French brand Hermes made a quiet entry into the Mumbai high street at Ballard Estate.

The next big brand entering the Indian market is Italian designer Roberto Cavalli.