Auto sales growth slows to 7.73% in May, indicating uncertain sentiment amid chances of deficient rainfall

New Delhi: Car sales in May rose 7.73% to 160,067 units from a year ago, but the pace was less than half of the 18% sales growth recorded in April, indicating uncertain consumer sentiment amid prospects of a deficit monsoon this year. 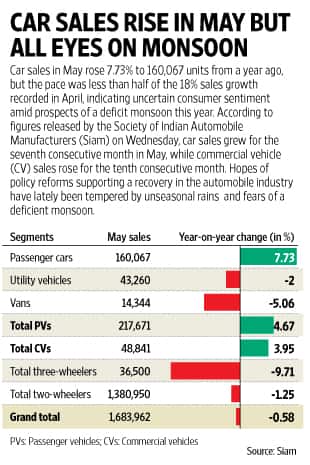 Sales in ever-shining scooter segment too slowed to 364,073 units, up 2.61% over the year-ago period, sparking concerns of sales growth in towns and cities.

“It only shows that urban demand is not that good either. I don’t know if there is a trend that we can see now," Vishnu Mathur, director general of Siam, said.

Hopes of policy reforms supporting a recovery in the automobile industry have lately been tempered by unseasonal rains and fears of a deficient monsoon.

The macro-environment is in a better situation than earlier, but poor monsoon could be a spoilsport, Siam said.

“A lot will depend on the monsoon," said Mathur. “I think more clarity on two-wheeler sales will come after the monsoon."

Sales of motorcycles fell for the seventh month in a row to 953,322 units, down 3.04% over the same period last year.

On 2 June, the India Meteorological Department (IMD) forecast a deficient monsoon, at 88% of the 50-year average, stoking fears of a second consecutive year drought.

A deficit monsoon in 2015 will aggravate the crisis as farmers suffered crop loss due to unseasonal showers in the rabi (winter crop) season in March and April this year. The agricultural growth rate was a poor 0.2% in 2014-15 and foodgrain production dipped by over 5%. This will affect demand for automobiles and consumer durables in the country.

Moody’s Investors Service said in a report on Monday that a weak monsoon could mean a ‘credit negative’ rating for India because of lower agricultural output, rising food inflation and higher government deficit. In April, ratings agency Moody’s revised India’s credit outlook to positive from stable.

According to Kumar Kandaswami, senior director, Deloitte Touché Tohmatsu India Pvt. Ltd, rural slowdown will impact some automobile manufacturers more than the others, given the nature of the portfolio and the strength of distribution.

“Typically, the products that will get impacted are the entry-level hatchbacks in passenger cars and SUVs and the economy motorcycles," Kandaswami said.

In the longer term, though, the conditions for greater rural demand may get built on stronger foundations, he said.

According to Mathur of Siam, passenger and commercial vehicle sales are on a recovery path, but they are nowhere close to their 2011 peaks.

“You must note that growth will continue fluctuating as only 3-4 firms are driving growth in the passenger vehicle segment," he said.

The conditions for demand growth seem to be getting built, said Deloitte’s Kandaswami.

“At this point, this may be true. What is critical would be the extent to which this is sustained —while inflation may stay low, salary growth will happen if jobs are created," he said. “...On the positive side, that interest rates on a downward trend helps demand."