Mumbai: The ascent of Ratan Tata’s half brother Noel Tata to the top executive position at Tata International Ltd shouldn’t be seen as another considered step in the group’s efforts to find a successor for the former, say a Tata group executive and a member on the board of one of the Tata companies. Instead, add the two who do not want to be identified given the secrecy and sensitivity that surrounds this issue, it should be seen as a sign of the group’s commitment to helping Tata International regain some of its lost, past glory.

In 2004, Tata International was a $1 billion (Rs4,620 crore) company by revenue, but in 2009-09 its revenue was a mere Rs963 crore. That number was still 25% higher than the revenue for 2008, but Tata International did appear to be losing momentum. The unlisted firm trades in leather, steel bars and sponge iron, and has been struggling to grow its business over the years.

Even as the company’s revenue has dwindled, that of multi-billion-dollar global trading firms such as Marubeni Corp. in Japan and Glencore International AG of Switzerland have soared. Even domestic trading firm Adani Enterprises Ltd has overtaken Tata International in terms of revenue. 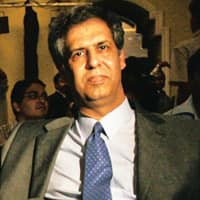 Taking charge: One of the first steps Noel Tata is expected to undertake in his new capacity would be readying a business plan for the company. Hindustan Times

One of the “first steps" that Tata is expected to undertake in his new capacity would be readying a “business plan" for the company, one of the two persons said.

Mint contacted Vaishnavi Corporate Communications, the public relations firm that handles the external communications for the group, but it did not share any additional information except for the press statement announced late last week on the appointment.

“There are no details beyond that statement," said a Vaishnavi executive. “It is a transition, you’ll have to give some time."

The group must have bigger things in mind for Tata International, said the second person.

“Noel Tata wouldn’t have been appointed by the group as managing director of Tata International to oversee a business that deals in shoe uppers," added this person, who sits on the board of another Tata group company.

The Tata group has substantial exposure to steel and power, and overseas revenue contributes to at least 60% of that. This is on account of global acquisitions by the group. Tata International could play a more active role in sourcing raw materials for the group’s iron and steel business, including coal. It could also build a model of being a stand-alone, independent trading firm doing business outside the group.

Companies such as Glencore International, a trading giant with interests in non-ferrous metals, could be the model that Tata International, under the stewardship of Tata, 53, will emulate, the second person said.

Glencore, which was set up in 1974, clocked a turnover of around $110 billion in 2009. The Swiss trading firm caters to raw material requirements for manufacturers of lead, zinc and copper.

“The assignment is not a walkover and if he stumbles, it would go against him," the person added. “Tata will take at least two years to put the company on the growth track."

Tata International has linkages with three large group companies—Tata Steel, Tata Chemicals Ltd and Tata Motors Ltd—which will form the foundation for any effort by the company to scale up its business.

The earlier avatar of Tata International was Tata Exports Ltd. Set up in the 1960s, it used to sell Tata vehicles to developing nations.

Till recently, Tata was heading Trent Ltd. He transformed Trent from a single-store company in 1998 to a 90-store network across retail formats and raised the consolidated turnover from Rs8 crore in 1999 to Rs1,137 crore in 2010. Tata, however, continues to be on the board of Trent and on those of Tata Investment Corp. Ltd, Titan Industries Ltd, Kansai Nerolac Paints Ltd and Voltas Ltd.