Mumbai: India’s drugs and pharmaceuticals industry is likely to post total sales of ₹ 2.91 trillion ($47.88 billion) by 2018, with an average yearly growth of at least 14%, aided by a rapidly growing domestic market and the newly emerging export opportunity as patents of at least a dozen blockbuster drugs in the US expire in the next three years.

“During 2014-2016, about $92 billion worth patented drugs are expected to go off patent in the US as compared with $65 billion during 2010-12," says an industry analysis report released on Wednesday by Care Ratings, India’s second largest credit rating agency. The domestic drugs industry, which is valued at ₹ 1.6 trillion at present, according to Care Ratings, is also expected to grow in the local market with aggressive rural penetration by drug makers, increased government spending on health and growing health awareness among people.

The large number of drugs going off-patent in the US presents opportunities for local generic drug makers including Sun Pharmaceutical Industries Ltd, Lupin Ltd, Dr Reddy’s Laboratories Ltd and Cipla Ltd among others. 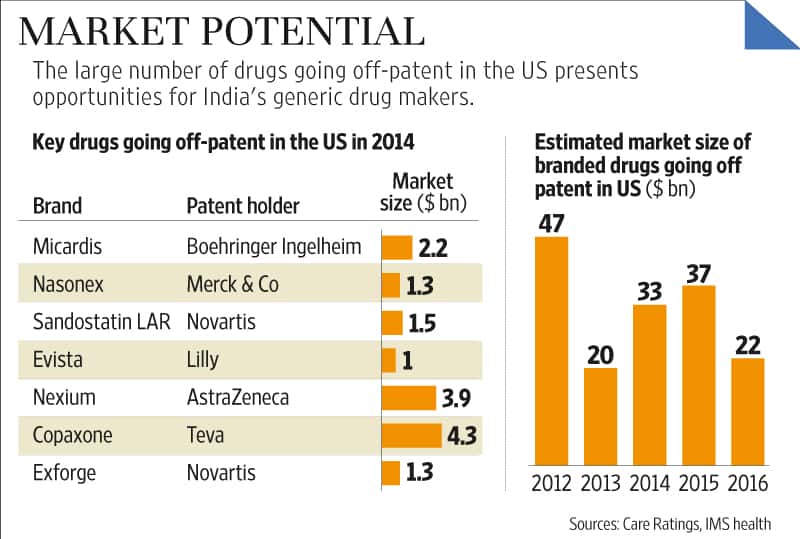 Anticipating the opportunity, Indian drug makers are building a strong pipeline of products to be sold in the US and have been filing abbreviated new drug applications (ANDA) to the US Food and Drug Administration (FDA), seeking approval for generic drugs.

They can file ANDAs five years before the patent expiry date. ANDA is a process where generic drug makers seek approval for marketing the copycat version of patented drugs in the US, typically when the patent expires. Once the generic copies hit the market, the prices of these drugs fall, benefiting patients. Therefore, the government also encourages such filings.

The US law allows a six-month exclusivity in the market to generic companies that file ANDAs first.

During 2013, Indian companies secured approvals for 39% of the total 400 ANDAs filed. This is significantly higher than in 2012 when 37% of 476 such applications got approvals, according to the report.

The domestic market will also see a significant growth in sales on the back of increasing affluence, changing lifestyles resulting in higher incidence of lifestyle-related diseases, increasing government expenditure on healthcare through schemes like the Central Government Health Scheme (CGHS), National Programme for Healthcare of the Elderly (NPHCE), Rashtriya Arogya Nidhi (RAN) and Janani Suraksha Yojana (JSY) in the next three years, according to Care analysis.

Domestic consumption of drugs, which has grown on an average of 11% in the last five years, currently accounts for about 47% of the total local production, while 53% goes to export markets.

The yearly average growth of drug exports in this period was 19%, which was also primarily driven by increasing demand for generics on the back of patent expiries of several high-value drugs such as Pfizer Inc.’s cardiac drug Lipitor, Roche’s Boniva, and GlaxoSmithKline Plc’s Combivir among others, according to Care Ratings report.

India exports pharmaceutical products to more than 200 countries. But US, being the world’s largest generic drugs market, is the largest export market. However, the Care report also highlights risks of the increased regulatory concerns in the US market, which may hamper the revenue prediction for the industry.

The US FDA has pulled up several major Indian drug exporters including Ranbaxy Laboratories Ltd, Sun Pharma and Wockhardt Ltd for non-compliance with quality standards in the local manufacturing units. Sun Pharma, the largest exporter of drugs to the US, had to stop exports from one of its manufacturing units in Gujarat in February and has been again put on alert as the US regulator has initiated a surprise inspection at another key unit in the state this week.