Port of Antwerp picks up 4% in Essar Ports

Port of Antwerp picks up 4% in Essar Ports

Essar Ports announced the deal on Wednesday, while declaring its March quarter earnings. The stake purchase by the authority running Europe’s second largest port, which values the company at ₹ 4,375 crore, will be made through global depository receipts (GDR). PAI will play a role in the management of the firm as well. 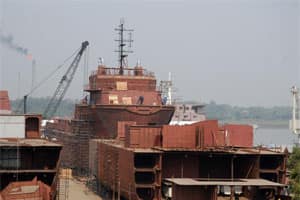 “The Antwerp Port Authority and Essar Ports will collaborate in the areas of training and consultancy services, port planning, traffic flow, quality and productivity improvement," an Essar Ports statement said.

As a part of the deal, Jan Adam, chief financial officer of the Port of Antwerp, will be appointed as a non-executive director on the board of Essar Ports.

Agarwal said most of the proceeds from the stake sale will be used to reduce debt, which stood at ₹ 5,488 crore on 31 March. With PAI’s help, Essar Ports will also try to build a so-called port city at its harbour at Hazira, Gujarat, along the lines of the one at Antwerp, where several industrial units surround the port, he added.

“Port of Antwerp has been on a lookout for assets in India for sometime now," said a Mumbai-based analyst with a foreign brokerage who declined to be named. “The clincher in case of Essar Ports may have been the fact that they handle a lot of steel volumes and there could have been some synergies on that account. For Essar Ports, it brings in straight cash."

Essar operates ports at Hazira and Vadinar in Gujarat. New terminals are coming up at Salaya in Gujarat and Paradip in Orissa. Essar has a cargo handling capacity of 88 million tonnes per annum (mtpa), which is being scaled up to 158 mtpa by fiscal 2014. Around 98% of the capacity utilization at its facilities is on account of captive cargo handled on behalf of group companies. Essar Ports aims to increase the share of third-party cargo to around 25% by fiscal 2015.

Essar Ports reported a loss of ₹ 61.50 crore for the three months ended 31 March, versus a profit of ₹ 11.50 crore in the year-ago period. Its revenue in the same period rose 45.6% to ₹ 297 crore. The loss was due to a one-time provision on account of a contingent liability of ₹ 235.50 crore. This was was counted as a contingent liability in previous quarters, but was charged to the profit and loss account in the March quarter. This liability was due to “recognition of interest on a CDR (corporate debt restructuring) facility," the company’s statement said.

Bhuma Shrivastava contributed to this story.