Tough task ahead for Infosys as FIIs continue to cut holdings

Bengaluru: Infosys Ltd needs to quickly win back the confidence of some of its largest foreign institutional investors (FII), who over the past 12 months have trimmed their holdings in India’s second largest information technology (IT) outsourcing company. 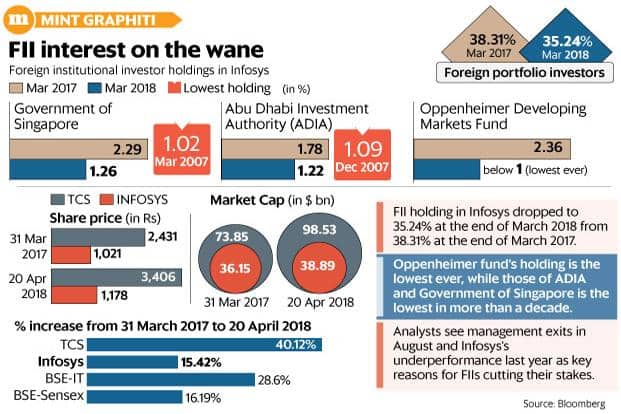 Oppenheimer Developing Market Fund, which in February last year backed earlier CEO Vishal Sikka in a feud with promoter N.R. Narayana Murthy, now holds less than 1% in the company, the lowest it has held in Infosys. Both Abu Dhabi Investment Authority and Government of Singapore have cut their holding in Infosys, the lowest in more than a decade (see chart).

FII holding in a company is an important barometer of a company’s performance and their decision to either buy or sell a stock often influences retail or small shareholders, according to equity analysts.

At Infosys, FII selling has come at a time when domestic mutual funds have increased their holding to 10.6% at the end of the latest quarter from 8.33% at the end of March last year. Still, Infosys shares have lagged TCS, and even BSE-IT and BSE Sensex have gained more than Infosys.

Mint could not independently ascertain the reason behind these three FIIs cutting their holdings in Infosys, which since August has held at least half-a-dozen investor meetings in India, Singapore, Hong Kong and the US.

A year-long feud at Infosys did distract the firm previously, impacting company’s revenue growth and profitability last year. Infosys managed to grow its dollar revenue by 7.2% at operating margin of 24.3% to end with $10.94 billion in 2017-18, lower than the 7.4% dollar revenue growth and a 24.7% operating margin reported in 2016-17. Both Sikka and non-executive chairman R. Seshasayee left Infosys in August last year, which according to two executives, is one reason behind some FIIs paring their holdings.

An email sent to Infosys on Friday went unanswered.