But in a move that can boost future earnings, Maruti Suzuki's board on Thursday approved a new method of calculating royalty payments to Suzuki Motor

Net profit rose to Rs1,799 crore for the quarter ended 31 December from Rs1,747.2 crore in the year earlier, the company said on Thursday. That fell short of the Rs2,006.5 crore profit estimate in a survey of analysts by Bloomberg. 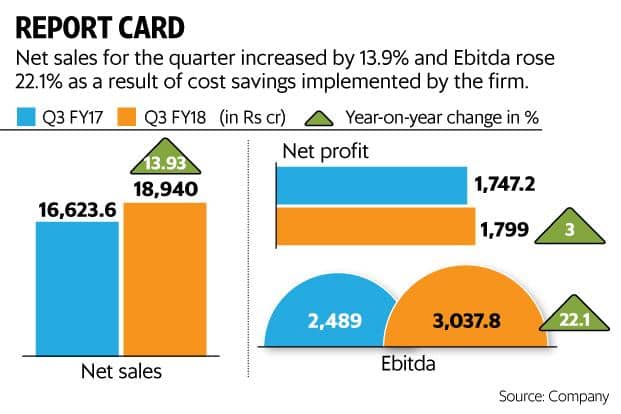 Net sales for the quarter increased by 13.9% to Rs18,940 crore. Operating profit or Ebitda (earnings before interest, taxes, depreciation and amortization) rose 22.1% to Rs3,037.8 crore as result of the cost savings implemented by the company. Operating margin expanded by 104 basis points to 16% from 14.96% in the year ago period.

In a step that will boost earnings, Maruti Suzuki’s board on Thursday approved a new method of calculating royalty. The company pays royalty to its parent Suzuki Motor Corp. The new formula has to be now approved by the board of its Japanese parent.

Maruti Suzuki has devised the new formula based on the improvement in the company’s research and development capability and reduced reliance on the parent company for technology.

The new method will be applicable on all new models launched by Maruti Suzuki since January 2017, starting with the urban compact hatchback Ignis. Maruti Suzuki pays royalty for some of its products in Indian rupees, which protects the company’s earnings from adverse currency fluctuations.

Maruti’s royalty payments stood at 5.6% of its net sales in the quarter ended 31 December.

“With the new calculation we are looking forward to the reduction in royalty payments. It will result in reduction in royalty payments for all future models and anything regarding R&D on the new models is to be adjusted suitably. It was in discussion for a long time and the board gave its approval for the same today," said Ajay Seth, chief financial officer, in a post-earnings conference call with investors.

Other income in the December quarter decreased by 58.9% to Rs244.9 crore. Total tax expense of the company increased by 13.9% to Rs768.4 crore as the investment allowance that the company got in the year-ago period was not applicable in the quarter ended 31 December and R&D benefits—tax exemptions given for developing vehicles in India—were reduced to 150% from 200% by the government. Raw material costs continued to be high as input prices rose.

According to Seth, the increase in commodity prices offset the cost reduction measures undertaken by the company.

“In terms of the commodity price increase there will be pain in the future. The realization per units has been increasing but it has stabled right now and going forward it is not going to increase substantially," explained Seth.

Maruti is poised to continue outpacing the passenger vehicle industry growth with a strong product pipeline and by expanding capacity at its Gujarat plant, said Bharat Gianani, an analyst with brokerage Sharekhan.

“With the company approving revision in royalty calculation on new models (likely to result in lower royalty expenses) and lower discounting on back of new model launches, we expect strong double digit earnings growth going ahead," said Gianani.