Airtel's Open Network is an initiative to partner with users and identify areas where the network can be strengthened. And, it has started showing results.

But never before has this happened in the telecom space, an area that has been screaming out for a solution. Ask around, and most point towards the frequent call drops and weak network coverage that make life both stressful and work far less efficient. Staying connected is no longer a choice.

However, one large player has decided to address this challenge, in a bid to get up, close and personal with its users. Airtel’s Open Network is an initiative to partner with users and identify areas where the network can be strengthened. And, it has started showing results.

Here's what Airtel user @kishi34 from Gurgaon had to say about the #OpenNetwork. pic.twitter.com/ds5J22xNTv

The campaign initially came as a surprise in an industry where information is typically guarded pretty vociferously. The step, which could usher in a new era of transparency and put pressure on rivals to fall in line, required not only courage but forward thinking by the company. Then came the challenge of educating the customer of the technology, and the benefits of participating.

Where it all began

To put things in perspective, India is the second largest telecom market in the world and has the third highest number of internet users in the world (Source: India Brand Equity Foundation). Mobile infrastructure unfortunately hasn’t exactly kept pace with mobile phone usage. In other words, we have a scenario akin to too many cars trying to pass through a narrow street leading to a traffic jam of sorts. This means network congestion, which could be one reason that could lead to a call drop.

India looks to US, UAE, Saudi Arabia for gas supply

Why the wait for new trade policy just got longer 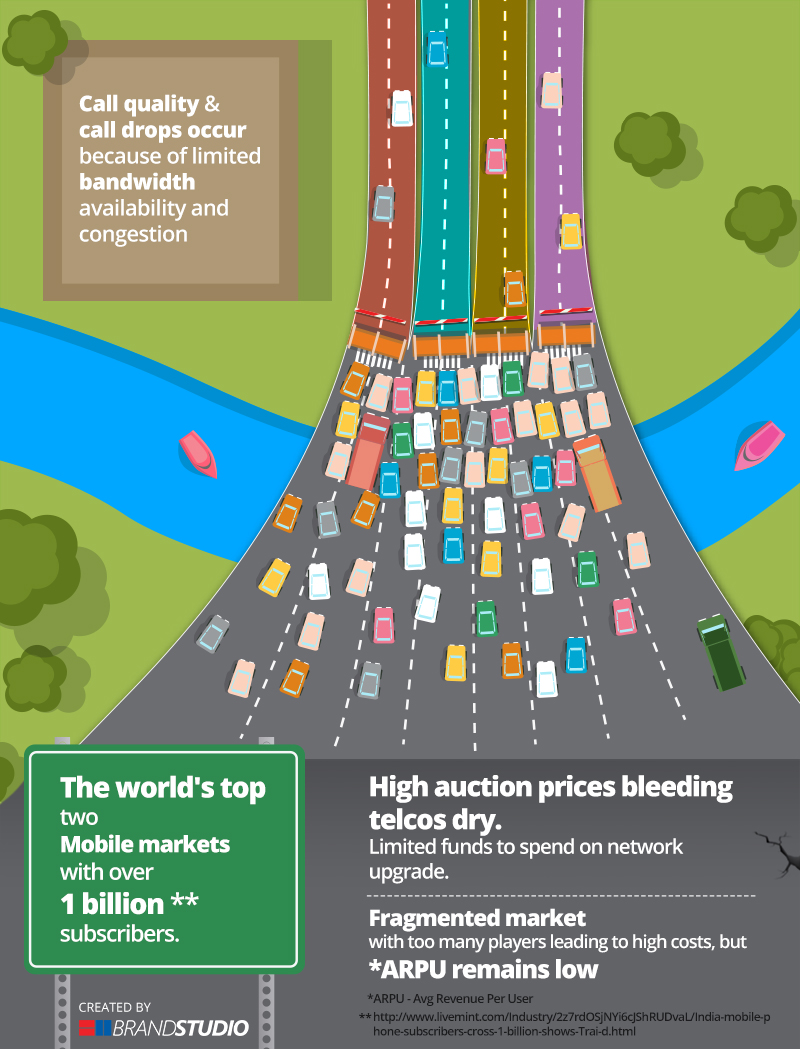 The other factor that has a bearing on the quality of network is coverage. And this is sometimes a tight rope walk for operators because often towers are forcibly shut down by government bodies due to construction activities.

But, why not improve the infrastructure? Well, that’s simply not under the control of service providers. Mobile infrastructure includes spectrum and the number of towers that a service provider can put up in various areas. Both of these are regulated. So while for bad traffic situations, one would think of building flyovers and the likes, mobile service providers’ hands are tied. They can neither add more capacity on the existing spectrum nor freely put up more towers because of regulatory restrictions.

So every time your app gives up on you and you blame the network, you’re quite right. But if you curse your service provider and want to switch services, know that that may not help. Why? Network congestion, restrictive regulation, high debt and lack of opportunities to add new towers are common problems for all telcos. This means even if you get better connection at home with your new operator, the coverage may most likely break down elsewhere.

What Open Network really is?

Under their open network initiative, Airtel has disclosed their entire network status and coverage details. Visit the open network map here . This can help you in:

1) Being informed about coverage holes so that you are better prepared. For instance, if you’re likely to pass through a weak network area, it might be a good idea to postpone that important conference call you were planning to take while travelling;

2) Giving Airtel information about weak spots that need their attention. This is important because the limited resources and options can be used to optimise infrastructure in the most efficient way.

3) Knowing all about the current towers and future plans. You can find out the status of towers, i.e., if they have been shut down, are being upgraded or if towers are missing. If your area is missing a tower, you can drop a lead and help Airtel set one up.

Airtel is the first mobile service provider to throw open all its network information through this initiative. And it is quite empowering because much more than just knowing about gaps, it lets you do something about it. Improving network quality is now a process you have a say in.