Mumbai: Regional airlines meant to serve the domestic market beyond India’s big cities have run into the turmoil currently roiling the aviation industry.

Some proposed regional airlines have decided to delay the launch of operations and postpone taking delivery of aircraft in the face of skyrocketing jet fuel prices and a looming slowdown in the economy.

And with the industry expecting a combined loss of $2 billion (about Rs8,620 crore) this fiscal year, the government has tightened its norms for issuing airline permits.

At least half-a-dozen companies are waiting for permits to operate as regional carriers, which would fly between large and small cities or between small cities. 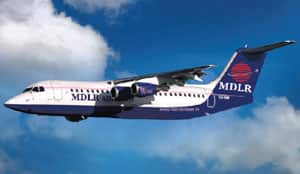 On course: MDLR airlines has started operations with 3 Avro planes.

Jet fuel prices have surged to Rs71,630.53 per kl in July in Mumbai, from Rs37,799.54 a year earlier, plunging many existing airlines deeper into the red.

“ATF (aviation turbine fuel) increases will definitely hit us as it will shoot up operation costs," a senior executive with Jagson Airlines said.

“We are looking for more financial concessions from the government."

This person, who didn’t want to be named as he is not authorized to speak with the media, also said the airline has not been able to recruit the crew needed for flying Dornier types of planes and helicopters.

However, Rajeev Bhatia, chief of operations at Jagson Airlines, said the carrier, which started in 1992 as a charter operator, would launch regional operations in a month.

Chennai-based Star Aviation, a unit of Dubai-based ETA Star group, is also postponing its commercial launch to March 2009 from September this year. The airline’s officials, however, said the delay is unrelated to the aviation slowdown.

“The decision was primarily due to the selection of aircraft," said V.P. Nagarajan, executive director (corporate affairs and projects) with Emirates Trading Agency Llc., Star Aviation’s parent company. “We don’t want to start with old aircraft. We are ordering brand new Brazilian Embraer planes," he said.

Meanwhile, the ministry of civil aviation has kept the issuance of permits on hold as it is scrutinizing and reviewing the financial and business models of the airlines in the wake of the turmoil in the market.

The ministry had introduced scheduled operator permits for regional airlines in August 2007, to increase air services to so-called tier II and III cites.

Regional airlines are required to operate in the small towns within one of the designated regions—north, south, west, and east and the North-East region.

But with the government sitting on permits, regional airlines are finding a way around this with so-called non-scheduled licences, which are easier to obtain because these are restricted permits.

Airlines with non-scheduled licences are not allowed to publicize their flight schedules the way carriers such as Jet Airways (India) Ltd or Kingfisher Airlines Ltd can.

In effect, these airlines operate more like charter flights.

“We have secured approval for non-schedule operations, which are not very different from scheduled operations except that we can’t publish the timetable for our flights," said Ramachandran Iyer, executive director of Chennai-based airline Air Dravida.

Iyer hopes to run profitable operations despite the huge losses the other airlines are facing.

“Charging tickets below cost is not the solution. There could be other ways including better yield management and increasing non-operational income," he said.

Emric Aviation Pvt. Ltd is on a similar route.

“We have a clearcut business model to make profits even at this turbulent time," said Muhamin Saidu, chief executive of Kochi-based Emric Aviation. “At present, we are waiting for the licence to come."

The airline is evaluating securing a non-scheduled licence to begin with, and so it can converge into scheduled operations later.

MDLR Airlines, which was running as a non-scheduled carrier, recently moved its operations to scheduled permits.

“Though the regional airline policy was aimed at enhancing regional connectivity, it has not properly directed or defined goals towards that," said Kapil Kaul, chief executive (Indian subcontinent and West Asia) of consulting firm Centre for Asia Pacific Aviation, or Capa.

On flying smaller planes that enjoy several tax concessions, Kaul said regional airline operators have multiple restrictions in this regard, but scheduled carriers have the same incentives that regional carriers have, without any of the constraints they face.

For example, a scheduled carrier can deploy an ATR plane (smaller planes with 40-70 seats) on the Ahmedabad-Kochi route and with all the concessions that a regional operator enjoys, but without being restricted to specific areas.