Patni in transition, seeks to be among Top 5

Patni in transition, seeks to be among Top 5

Mumbai: It’s been a busy first three months for the new chief executive (CEO) of Patni Computer Systems Ltd. Jeya Kumar says he has been in India for only eight days since he took charge of the software services company in February. He has mostly been on the road and in the air since then, meeting clients and employees across the world even as he sketches out the broad contours of what the company will look like in the future: Patni 2.0. 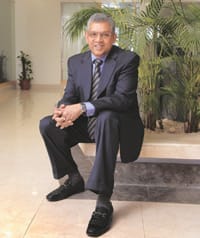 Taking charge: CEO Kumar was chosen by founder Narendra Patni after a global search that lasted two years to find ‘the right man for the job.’ Abhijit Bhatlekar / Mint

That, however, could be a tall task given the company’s growth record till now and the fact that most software services firms foresee tough times ahead, thanks to a slowdown in their main markets, protectionist threats emanating from the US and a strong rupee.

An analyst tracking Patni Computers at Parag Parikh Financial Advisory Services Ltd (PPFAS), who did not want to be named, says, “At Patni, a professional management has just been put in place. Whether they will be allowed a free hand over the long term is too early to tell. While, the company’s skills and experience in IT (information technology) are undisputable, do they have the size and scale to bid for $100 million projects?" he asks. “Customers look at past record and employee strength. Patni has only 15,000 employees compared to a roster size of over a lakh employees in Infosys, Wipro and TCS (Tata Consultancy Services Ltd), respectively."

Kumar was hired by company founder Narendra Patni after a global search that lasted two years to find “the right man for the job", says Patni in an email. The Australian citizen had earlier headed the $5.5 billion services business of Sun MicrosystemsInc. and was CEO of Indian outsourcing firm MphasiSLtd. “It was an extensive search, and they checked my credentials with almost everyone I worked with, except perhaps my mother-in-law," says Kumar in jest.

This is Kumar’s fifth job in six years, as his wife reminded him when he signed up—and one that will put his management skills to test.

The firm Kumar leads has a lot of catching up to do. More than three decades after the husband and wife team of Narendra and Poonam Patni set up Patni Computer Systems, the firm is going back to its roots to rebuild a business that at one point had a headstart over others. This includes Infosys Technologies Ltd, whose promoters once worked for Patni.

Kumar and Narendra Patni have been doing a lot of running around in their bid to close the gap. “Naren (Narendra) and I have addressed 20 town hall meetings in various cities in India and abroad, and we met key clients that Naren personally knows for decades now," he says, and adds that Patni has explained to stakeholders the succession planning.

Patni’s move is significant. It is one of the rare instances in India where a family is ceding management control to a professional. Narendra Patni, who built the company from scratch and is, therefore, “very attached" to it, explains the recent transition thus: “I have done my part in taking the company to its current position. Now it is time to hand over the company to a new set of leaders."

Patni management has always used the “corporate centre model", with four-five key members managing the business. Kumar’s ‘A team’ (he is still hiring) will have 13-14 members. A 13-cylinder car will any day be faster than a four-cylinder one, Kumar explains. “We need to drive in all directions very fast."

He has already strengthened the European management by appointing four key members and appointing new executives to expand operations in Germany, Austria and Switzerland.

“Everybody is trying to grapple with why the world’s biggest economy and a champion of free trade is interfering with business. Their intention is to save jobs. Now it’s a question of how we can change our business and delivery model. to compete in that environment," Kumar says.

Patni has moved quickly under Kumar to set up two onshore development centres in Illinois, the US, and in Mexico. “We are giving choices to our customers and making sure we put in the right level of investment and then try and go very fast," he says.

Patni currently employs about 2,000 people in the US. With outsourcing having become a sensitive issue in US President Barack Obama’s administration, Kumar is preparing for a new business order, one in which where customers will demand more onshore sites.

Kumar has also taken some hard decisions: bench strength is down to one-third, from 1,500 people to 500. He is also taking a second look at the firm’s real estate. “Those buildings that we don’t need will be sub-leased," he says.

Patni 2.0 is on the drawing board: the growth plan which will spell out the firm’s future. It envisages a firm that is different from the current version.

The plan will chart out areas where Patni should spread, including new verticals, either through acquisitions or through growth in the existing business. The blueprint will also identify areas where it needs to build coverage and capabilities. Kumar says Patni has no coverage in the Asia-Pacific region. In Japan, it doesn’t have a business model and he will try and localize the business there. Nihon Patni and a joint venture with local partners are in the works. It will also look at building its presence in Australia, Hongkong, Singapore and Malaysia. “There is no need to be India-centric, as the quality of buildings, tax concessions in these regions are more attractive than here."

But what went wrong in the first place?

“There has been implementational challenges at Patni, which I think made the company move down the ladder," explains Kumar. “We are going back to our roots. When a business is competing all the time, one tends to forget what its strengths are."

Patni was the pioneer in offshoring and if Indian IT firms do a business of $40 billion annually, Patni’s contribution is minuscule. “If you come with an innovation, which has got a low entry barrier, then the shelf life of the innovation is very short. So many companies have mushroomed over the last 30 years," Kumar says, indicating that Patni of the future would look at businesses that are difficult to replicate.

Can Patni ever catch up? Closing in on the big boys of Indian IT world may be a very tall order, but the ambition is there to be among the top five in the Indian IT business. “In the next three years, I see Patni among the top five IT services companies in India," says Narendra Patni in an email response to Mint’s queries, sent after the paper interviewed the new CEO.

Over the past three months, Narendra Patni has accompanied Kumar across the globe to address employees and customers on the succession planning unfolding at India’s oldest IT firm.

The markets have warmed to the transition. In a research report, analysts Mitali Ghosh, Pratish Krishnan and Kunal Tayal of Bank of America Merrill Lynch wrote, “We expect the appointment of the new CEO to likely catalyse investment initiatives and improve management effectiveness."

Patni shares have always quoted at lower multiples than its peers and this was attributed to ownership issues. It is majority owned by Patni brothers—Narendra, Gajendra and Ashok. The latter two own more equity than Narendra, who is the founder. A recent research report issued in the first week of May, by Raunak Onkar of PPFAS, alluded to the differences between Narendra and his two brothers. “Narendra Patni and his brothers have been known to be in the midst of a stake war owing to Narendra Patni’s veto powers till 2013."

However, the PPFAS report also believes that the management change could change things at Patni. “This change in management seems like a good move, indicating complete attention to business performance than other personal feuds of the promoter."

The company has $300 million in cash and generates a free cash flow of $100 million every year; this may come in handy if Patni 2.0 zeroes in on new verticals for growth.

While Patni will consider acquisitions, he will be very choosy, he says. “You need to buy assets you don’t have and mingle them with assets you have to get the power of three."

Did Patni Computer look at Satyam when it was on the block? Kumar disclosed that when he was heading Sun Microsystems’ services business, in 2006, they did look at Satyam, but found it very expensive. As for whether Patni, with all that cash and a new resolve, ever eyed Satyam, he says candidly: “When you are not sure how much is the topline of the company, then how do you value the company?"

Kumar’s acquisition policy is simple: Topline has to be there in any company that is being acquired, as profits will follow since costs are something that can brought to keel anytime. What’s more, the services business is a peoples’ business, and there has to be a cultural fit, he says.

“We can’t change history, but what we can do is change our future," Kumar says.

“In a fast moving world the worst thing to do is to stand still," he adds, as he wraps up our meeting and prepares for another flight out of India later that night.