Naraingarh/Haryana: On a warm winter afternoon, jeweller Parveen Saini stops his motorcycle and walks across the road for a closer look at a small car mounted on the back of a truck. Few people in this rural outback in northern India have seen the hatchback, a Chevrolet Spark made by General Motors Corp., or GM, at its Talegaon factory near Pune in Maharashtra. 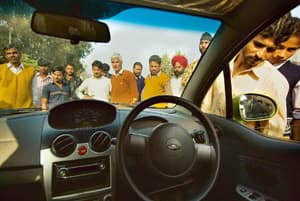 Window of opportunity: Locals check out a car at the Spark roadshow in Naraingarh. The village boasts of several NRIs, whose remittances have pushed up residents’ purchasing power. Harikrishna Katragadda / Mint

“Why don’t you test drive the car first," says a GM agent, who hands him the keys to a fluorescent green Spark parked a few metres away, with the words “Full of life" emblazoned across its bonnet.

As sales of automobiles shrink in the cities amid an economic slowdown, car makers are tapping markets in the hinterland.

In doing so, the Indian unit of GM is taking a road traversed by successful rural marketers: If you want to tap the expanding middle class, take your product outside the main cities and sell it in a language that the locals understand.

Naraingarh is a prosperous town of 20,000 people. Cars made by Maruti Suzuki India Ltd and Tata Motors Ltd are favoured by people in the town where GM, the biggest US auto maker, and its products have little market presence.

Yet, the rural marketing initiative helped Dyanamic Motors, GM’s local dealership located in Ambala, the cantonment town 40km away, to sell 10 cars last month in this town and its vicinity.

Car sales in the country fell by 6.9% in December to 82,105 units. Sales are shrinking as economic growth slows—to as low as 7% by government estimates for this fiscal from an average 8.9% pace over the past four years—and car loans become more expensive and harder to get.

That’s partly driving auto makers to focus on the hinterland though markets outside of the main cities, such as New Delhi and Mumbai, make up only a tiny portion of total sales.

So far this fiscal, Maruti Suzuki has sold 510,659 cars, including just 30,000 across small towns such as Naraingarh.

GM’s small-town and rural sales are even more modest: about 500 cars out of total national sales of 65,702 in calendar 2008. But as Ankush Arora, vice-president of sales and marketing at General Motors India Pvt. Ltd explains, it is towns such as Kurukshetra, Rohtak and Hoshiarpur in the north, Ahmednagar in the west and Nellore in the south where the company’s sales are growing at the fastest pace—35-40%.

The National Council of Applied Economic Research, a New Delhi-based think tank, expects rural areas to clock double-digit growth in automobile sales this year. Demand has risen because of a good monsoon and increased spending power on the back of government programmes aimed at creating jobs in the villages and refurbishing rural infrastructure.

Driven: Nirmal Orr (above, in a shawl) cannot drive, but came to check out the car at the roadshow; and Parveen Saini (right) stops by for a test drive. Harikrishna Katragadda / Mint

Venturing into outbacks such as Naraingarh, GM is aiming beyond just selling cars. The firm wants brand recognition of the kind Maruti and Tata have in small towns across India, where Maruti and Indica are used as generic substitutes for any small car.

Many who stopped to take a look at the Spark on its roadshows across Haryana thought it was the Tata Nano, the Rs1 lakh car Tata Motors expects to launch in March, says Jitendra Kaushish, a sales executive at automobile dealership Dyanamic Motors.

GM’s Detroit-based rival Ford Motor Co. is expected to launch a small car in 2010 and brand recognition is expected to play a key role as the two US manufacturers compete with themselves and other, more established car makers for a larger market share. GM is aiming for a 10% market share in India, up from 3.8% in the first half of this fiscal.

“People in small towns are not so savvy about buying cars and depend a lot on word of mouth," says Praveen Kapoor, the branch manager of ICICI Bank Ltd in Naraingargh.

The bank opened for business in March and Kapoor says that it’s seen fixed deposits and other investments grow quickly. He declined to discuss numbers.

A large non-resident Indian (NRI) community calls Naraingarh home and their remittances have pushed up the town’s purchasing power significantly over the years. Several sport utility vehicles, or SUVs, passed by during the two-hour GM roadshow.

Taking the fight to rivals

For GM, the tie-up with RC&M is a cost-effective way of getting a toehold in rural markets. Priya Monga, business head at RC&M, says the total cost of the marketing campaign spread over nine states is Rs1 crore.

The company zeroed in on areas with Maruti and Hyundai dealerships and plans to focus on them in the first stage. “A hundred spot bookings have been received from these towns so far," she says.

At Naraingarh, the roadshow begins once a hundred-odd people have gathered. First, GM is introduced as a company whose cars are sold in 200 countries.

People are reminded of the Tavera, the multi-utility vehicle which is the only GM brand they seem to have heard of. Once the Tavera and Spark are connected to the same company, interest levels perk up.

The emcee, Harpal Singh, takes pains to shout the word Spark at least once every 50 words or so. “Spark, Spark, Spark...," he’s almost relentless.

“What are the cars that GM makes?" he asks rhetorically in Hindi. “Spark, Aveo, Tavera, Optra, Captiva."

Next up, the name of the nearest GM dealership is announced and those interested are invited to take a test drive. Loans can be arranged from a nearby branch of State Bank of India, they’re told.

“I’ve already told the local branch manager to let me know if someone comes to ask for a loan. That way, I know the customer is ‘hot’ and I can pursue him seriously," says dealer Kaushish.

It’s a very convivial setting and several passersby have stopped to take a look at what’s going on. There’s now a small traffic jam to the consternation of a local policeman. Three schoolchildren have stopped by on their way home. “My father promised to buy me a car after class XII. Maybe I’ll tell him to buy this one," says Rajinder Singh, who studies at the local DAV School.

Nirmal Orr, a homemaker who doesn’t know how to drive a car, stayed on for the roadshow and posed three questions that turned out to be the three most asked that day.

“What is the price of the car?"

“Is it petrol or diesel?"

“What sort of mileage does the car give?"

Meanwhile, a spot quiz is held with questions based on the GM factoids recited repeatedly over the last half an hour. Winners get themselves a deck of playing cards with GM’s name and logo on the back.

Behind this is a clever brand ploy at work: Once the agricultural season is over, people gather in squares across the town to play cards. If they play with its cards, GM hopes, they will remember the company.

Test rides completed, the names of prospective customers are collected. Those considered likely to buy the car are tagged “hot" and follow-up calls made to them the next morning.

In all, 40 customers were tagged that day, and a fortnight later 10 sales were sewn up.