Thanks for Visiting Mint
You seem to have an Ad Blocker on. Please turn it off in order to continue, or whitelist Mint
HOW TO TURN OFF AD BLOCKER
OR
REFRESH IF YOU ALREADY TURNED OFF THE AD BLOCKER
Home >Companies >Kingfisher renting out planes to foreign carrier

New Delhi: Kingfisher Airlines Ltd, will rent out at least two of its five long-haul A330-223 aircraft to Nigerian carrier Arik Air Ltd for two years from the third quarter of 2009.

This indicates that the Mumbai-based carrier’s expansion plans into Europe and the US remain uncertain. It sold two of its long-haul, Airbus SAS-made A340s to Arik Air late last year when it was scheduled to take deliveries of 10 other aircraft to start international operations.

Kingfisher Airlines, India’s largest private carrier by passengers, launched only a few international flights with five of the A330s deliveries it accepted.

“All it says is that Kingfisher will not expand in the long-haul sector for at least two years," a London-based analyst said on condition of anonymity. “It will continue to expand in the region and I expect flights to start to Singapore, Bangkok, Kathmandu and the Middle East in the next 18 months."

The analyst added that the leases were an indication that Kingfisher may expand regionally unless there are drastic changes in the international market. 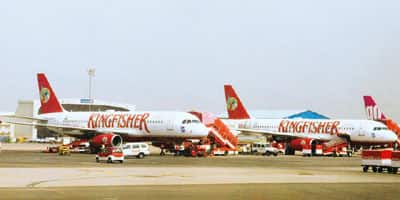 Tough times: Kingfisher Airlines has launched only a few international flights with five of the A330 deliveries it has accepted. Harikrishna Katragadda / Mint

The Arik Air lease will start almost a year after the two A330s, valued at list prices of $180.9 million (Rs862 crore) each, have been grounded.

Rival domestic carrier Jet Airways (India) Ltd has given nine wide-body aircraft on lease to West Asian carriers but for much shorter time.

On the back of a slowing economy, India’s airline firms have been facing tough times and on 13 May reported a drop of around 15% in passenger traffic in April from the year ago, showing that a contraction in air travel that began end-2007 is nowhere near ending.

At least 2,500 airline employees are expected to lose their jobs in the next four-six months from domestic carriers that are set to post a combined loss of $2 billion in 2008-09, according to airline executives and analysts, Mint reported on 3 May. This is about 8% of the total workforce employed by private carriers.

Lagos-headquartered Arik Air, which began operations in 2006, started its first intercontinental flight between London and Lagos in December using the two A340s it bought from Kingfisher. The airline is yet to make up its mind whether to buy another of Kingfisher A340s but said it would rent the A330s.

“At present we are confirmed taking two of the Kingfisher A340s. We are still considering (buying) the third aircraft," an Arik Air spokesperson said by email.

Typically, an airline earns $2-2.2 million a month on leasing a wide-body aircraft on wet lease. A wet lease is an arrangement where one airline provides an aircraft, complete crew, maintenance and insurance to another airline, which pays by hours operated. The latter provides fuel, covers airport fees and any other duties and taxes.

The wet lease will mean that Kingfisher-trained pilots and cabin crew, in conjunction with Arik Air cabin crew, will help run the new flights that will be launched by the Nigerian carrier, the Arik Air spokesperson said.