Mumbai: Lenders to SRS Ltd have reached an agreement with its promoters to sell the Faridabad-based company’s retail and real estate businesses to recover loans, two people directly aware of the development said on condition of anonymity.

The decision to put more businesses on the block was taken after SRS Ltd, which is present in retail, real estate, healthcare and multiplexes, failed to agree on the valuation of its cinema exhibition business, said the persons cited above said, requesting anonymity. 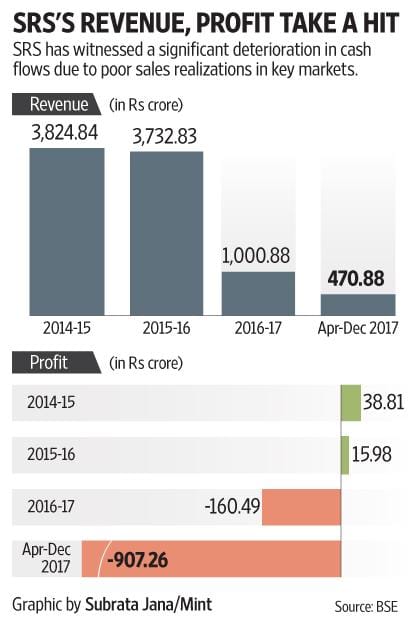 Mint had reported on 25 January 2017 that Inox Leisure Ltd had emerged as the highest bidder for SRS Cinemas, the multiplex business of SRS Ltd, and had offered close to Rs225 crore for the theatre chain.

Confirming the latest development, a spokesperson for the SRS Ltd said that it had decided to hive off its business verticals—in particular cinemas and retail—as its accounts with the lenders had been classified as non-performing assets. SRS currently owes more than Rs1,000 crore to various lenders and had mandated SBI Capital Markets to sell its multiplex business .

“With the intent to liquidate the outstanding dues towards the lenders, the group, in the interest of the lender and stakeholders alike, has given its consent to the lenders to look for potential investors for assuming exposure/stake in the group companies by way of full and final settlement of lenders/existing stakeholders’ dues through a JV/outright sale, etc.," said Vineet Gupta, head (corporate finance, new business development and financial strategy), SRS Ltd.

“The negotiations with the various strategic investors are at different stages and the milestone is likely to be achieved in the near future and the group might come out of the present turmoil," Gupta added.

An email query sent to SBI Capital Markets, which has been appointed as deal adviser, remained unanswered till press time.

The SRS group was founded in 1985 by Anil Jindal. It was incorporated as SRS Commercial Co. Ltd in August 2000, and later renamed SRS Entertainment Ltd in January 2005.

The group entered the multiplex business in 2004. It listed as SRS Ltd in 2011. Over the years, SRS Ltd has diversified into other businesses, including consumer packaged goods, jewellery and retailing, all of which operate under the SRS brand.

Currently, more than 90% of the company’s revenue and profits are accounted for by the jewellery business. In a credit rating report in June last year, ICRA had reaffirmed the long-term and short-term ratings of SRS Ltd to ‘D’ or Default because of defaults on its loan repayment obligations.

The rating agency observed that company witnessed a significant deterioration in cash flows due to poor sales realizations in key markets in the Middle East.