Mumbai: Come 15 October, G.R. Gopinath, pioneer of low-fare aviation in India, will start the first phase of expansion for his four-month-old air cargo venture, Deccan 360, by entering into the small parcels business with Nagpur as a hub.

From that date, Gopinath’s Deccan Cargo and Express Logistics Pvt. Ltd, which runs Deccan 360, will fly three large Airbus A310 planes and seven smaller ATR planes to connect 17 small and big Indian cities as well as international destinations such as Dubai and Hong Kong. 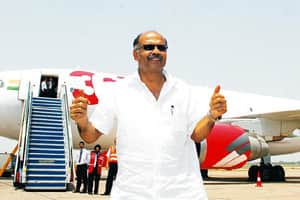 Gopinath, who had launched India’s first low-fare airline Deccan Aviation Ltd, which ran Air Deccan, launched Deccan Cargo in May with one A310 plane for its international general cargo business.

Gopinath said Deccan Cargo is not looking to raise funds from the market immediately and is focusing on developing end-to-end logistics infrastructure.

Last year, prior to the launch of the air cargo firm, he had asked Mumbai-based investment bank Edelweiss Capital Ltd to seek private-equity investors.

The former army captain has since put that plan on the back burner and is now putting his own money into the cargo venture. He said he will consider fund-raising options when market conditions improve.

“Now, I am looking at entering the express logistics segment (small parcels business). We have selected at least 75 franchisees across the country to facilitate this," Gopinath said. “In mid-October, for the first time in the country, at least 17 tier-II (or smaller) cities would be connected by ATR planes."

Deccan Cargo is developing a huge warehouse at Nagpur to create a multi-modal logistics hub that will aggregate, distribute and redistribute cargo to and from international and domestic locations.

“The longer game plan is the bigger Airbus planes would be plugged into (the) Nagpur hub to have a direct connection to international locations. This should happen by November," Gopinath said.

Industry players are sceptical about the venture as several other firms that had lined up plans for air cargo businesses in India have been backing out even before the economic slowdown began.

Several other firms, too, had lined up plans for air cargo ventures but haven’t taken off yet. These include India’s biggest company by market value, Reliance Industries Ltd, Quikjet Cargo Airlines Pvt. Ltd, in which the Tata group has a stake.

According to International Air Transport Association (Iata), demand for air cargo has remained weak, at 16.5% below June 2008 levels. This is a moderate improvement over May, which was 17.4% below 2008 levels.

“June marked the 13th consecutive month of contracting demand for international air cargo. Despite reaching a bottom in December, improvement has been slowed by high inventory levels and soft demand," Iata said in a statement on 30 July. “At the current pace, it will likely take several years before demand returns to early 2008 levels."

A senior executive with a rival cargo airline says Deccan Cargo’s loads are not encouraging. “It is tough to make an integrated logistics infrastructure across the country," he said, asking not to be named.

Gopinath did not disclose the load factors of his planes.

“Certainly, carrying general cargo (alone) is not going to give you money. But you cannot park your planes on the ground," he said.

“The revenue comes from end-to-end integrated service delivery. The revenue from general cargo is not great. But the money comes from high value express cargo. That is where we will be from 15 October," Gopinath said.

The size of the global express market is around $175 billion (Rs8.5 trillion). However, in India, the size of that industry is less than $2 billion, according to Union minister for commerce and industry Anand Sharma.

While speaking in a seminar organized by lobbying group Express Industry Council of India in New Delhi on Wednesday, the minister said in a statement that the express cargo sector is predicted to grow at around 10-15%, which would place it among the fastest growing sectors in the country and nearly the same size as that of the Indian shipping industry.

“Certainly, it is a good business model to have express logistics along with normal cargo. It makes lot of sense since it is a kind of vertical integration," said Arpita Mukherjee, professor, Indian Council for Research on International Economic Relations. Mukherjee has specialized in express logistics.

Worldwide, bigger logistics companies have infrastructure for both general and express cargo, she said. “Speed, reliability and door-to-door delivery are most important performance parameters. Currently, express and normal cargo are equally important in terms of money. But the question is how soon you can deliver a product across the country," Mukherjee added.