Eicher to tap into big demand for city buses

Eicher to tap into big demand for city buses

Commercial vehicles maker Eicher Motors Ltd plans a nationwide launch of a 75-100-seater city bus by early next year as it prepares to eat into a market divided almost entirely between two players in India.

The buses will compete with those from the two dominant players, Tata Motors Ltd and Ashok Leyland Ltd, which together sell nine out of every 10 buses in India.

“Eicher is working on a 75-100-seater semi low-floor city bus which would be available in the non-air-conditioned and high-end AC and air suspension versions", a company spokesperson said, adding that it plans both compressed natural gas (CNG) and diesel versions of the bus. 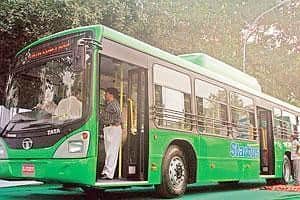 On a roll: A low-floor bus from Tata Motors. Commercial vehicle makers in India are expanding aggressively as the market readies for better roads, with state governments looking to improve urban infrastructure. (Photo: Jasjeet Plaha/HT)

Coupled with an ageing fleet, this is forcing some states to upgrade to new buses. More than a dozen cities, including New Delhi, Bangalore, Mumbai and Pune, have embarked on putting bus rapid transit systems (BRTS) in place, which will see high-technology buses with electronic destination displays, GPS and electronic on-board ticketing, among other things, plying on the roads.

“We believe a significant portion of our turnover would be coming out of this segment since India is seeing a major growth in the city bus segment with the BRTS implementation plan in 16 cities," said the Eicher spokesperson.

Eicher, which also makes Enfield motorbikes, is yet to decide on the number of buses it plans to produce.

Tata Motors, India’s largest commercial vehicles maker, has already won an order for 500 city buses from the Delhi Transport Corporation, which is currently upgrading its fleet ahead of the 10th Commonwealth Games to be held in the Capital in 2010.