Mumbai: The roots of the Aditya Birla Group go back to almost a century before India’s independence from colonial rule. Indeed, its role in India’s economic history is tied inextricably with the nation’s quest for political freedom. The foundation of the Birla business empire, which was eventually divided among the members of the subsequent generations, was laid by Shiv Narayan Birla, who started cotton trading in Pilani, Rajasthan, in 1857.

In the early years of the 20th century, his grandson, Ghanshyamdas Birla, established businesses in critical sectors such as textiles and fibre, aluminium, cement and chemicals.

The Kolkata-based businessman became closely associated with Mahatma Gandhi and accompanied him to London on two occasions to attend the historic round table conferences. It was at a public prayer meeting in Birla house in Delhi in 1948 that Gandhi was shot dead by an assassin.

Grasim Industries Ltd, the flagship of the Aditya Birla Group, was incorporated on 25 August 1947, just 10 days after India became independent. The firm then manufactured textiles from imported raw materials. Grasim is now a global leader in viscose staple fibre. 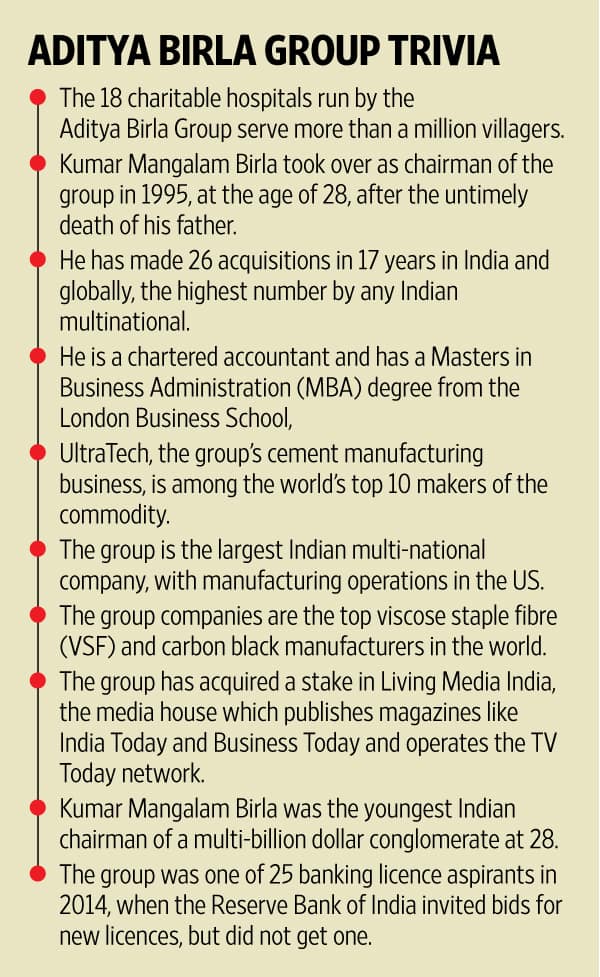 Basant Kumar Birla—the youngest of Ghanshyamdas’ three sons—and his son, Aditya Vikram, were always the patriarch’s favourites. When Aditya Vikram returned after completing his education in the US in 1965, he started Eastern Spinning Mills and Industries.

In 1983, when Ghanshyamdas died, Aditya Vikram was appointed chairman of the Birla group of companies.

Three years later, in 1986, the group’s firms were apportioned to family members and since Aditya Vikram and B.K. Birla managed many of the bigger companies, they got a lion’s share of the clan’s businesses.

He went on to set up 19 companies outside India—in Thailand, Malaysia, Indonesia, the Philippines and Egypt.

He also shifted his base from Kolkata, where business and industry was slowing, to Mumbai (then Bombay). He turned his companies around. Today, they include the world’s largest producer of carbon black and the largest refiner of palm oil. It is also the largest Indian multinational with manufacturing operations in the US, according to the group’s web site.

Five years before Aditya Vikram Birla’s death, his son Kumar Mangalam had begun getting involved in the companies’ operations.

In 1996, Kumar Mangalam consolidated all group companies under the umbrella of the Aditya Birla Group.

Under Kumar Mangalam Birla, the conglomerate entered the businesses of copper, insurance, telecommunications, retail and software services. He consolidated, expanded and went on an aggressive acquisition drive.

For starters, the group divested its stake in the oil refining business to Oil and Natural Gas Corp. Ltd (ONGC) in 2002 in a bid to sharpen its focus.

After several rounds of mergers and demergers, Grasim acquired a controlling stake in the newly-formed cement firm, UltraTech Ltd, from Larsen and Toubro Ltd in 2004.

Today, the Aditya Birla Group is a $40 billion ( ₹ 2.45 trillion) corporation and many of the group firms are in the league of Fortune 500 companies. It has over 120,000 employees from 42 nations, and operates in 36 countries. Notably, 50% of the Aditya Birla Group’s revenue comes from its overseas operations.

The group owns one of the top three telecom companies in India, the nation’s largest cement manufacturer and one of its top retailers.