Woman who failed to read the fine print of her offer

Woman who failed toread the fine print of her offer

New York: Yu Lia Chun, a retired hospital orderly in Hong Kong, never heard of Lehman Brothers Holdings Inc. before she got a call last September from her banker.

He said, “Did you hear the news? Something has happened to Lehman," Yu, 66, recalled in an interview in June. “I didn’t get it." 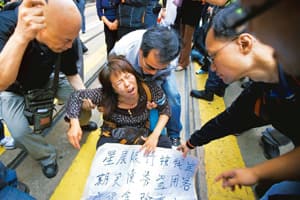 Hit hard: A file photo of Citibank clients who bought structured products from the bank protesting outside the bank’s branch in China. Adam Dean / Bloomberg.

What hit Yu and her family was a tidal wave triggered halfway around the world by the biggest bankruptcy in US history. The 15 September 2008 collapse of Lehman, with $613 billion in liabilities, had unforeseen and far-flung consequences that devastated those, like Yu, who didn’t know their fates were tied to the investment bank.

The US responded within a week to guarantee money markets and bank-to-bank lending. Within a month, Congress agreed to spend $700 billion to prop up banks, the Federal Deposit Insurance Corp. guaranteed new bank debt, and Federal Reserve lending to financial institutions ballooned by $1 trillion.

Those programmes, which succeeded in stemming the panic, remain in place today. What they didn’t do was save Yu and thousands of other investors in Hong Kong, Singapore, Taiwan and elsewhere.

Yu said she went to an export trade show in Hong Kong two years ago and met Chow Chi Chung, a salesman for Amsterdam-based ABN AmroHolding NV. He offered her a better return on her savings if she switched banks, she said. So she did. A month after their meeting, Yu said Chow called her to say he had a new product that could return as much as 20% a year because it was linked to the stock performance of three large Chinese companies—China Communications Construction Co. Ltd, China Merchants Bank Co. Ltd and Ping An Insurance (HK) Co. Ltd.

Yu said she didn’t read the fine print, trusting Chow when he told her she couldn’t lose her principal. Had she looked at the prospectus and understood it she would have seen that she had essentially bought three call options—contracts that would capture gains if the shares of the three firms rose by a certain amount—coupled with the equivalent of a Lehman corporate bond. If Lehman defaulted, her money would be gone.

There are 873 issues of such Lehman equity-linked structured notes outstanding with a combined face value of about $8.7 billion, all now in default, according to data compiled by Bloomberg. Bonds were denominated in pounds, Swiss francs and Hungarian forint, as well as Australian and Hong Kong dollars.

Kelvin Wong in Hong Kong and Tom Cahill in London contributed to this story.