How a potential SpiceJet grounding affects you

An interactive visualization that shows SpiceJet's share on all its 241 routes. Use it to see how the airline's potential grounding might affect the routes you fly

The size of the circle slice shows the approximate number of SpiceJet flights to and from that city. Click on the slice associated with a city to see its flights. Connections between two cities (the green lines) represent routes. Place your cursor at any point on a green line to see SpiceJet’s seat-capacity share, as well as the weekly seat capacity of all airlines on that route.

Source for data: Winter schedules approved by the Directorate General of Civil Aviation as on 26 October 2014. Seat capacity for all airlines has been computed based on the flight plans outlined by them in the winter schedule and the aircraft in their fleet.

Chart 1: In its last full-flying plan, SpiceJet intended to service 241 routes between 39 cities. In about 80% of the routes, SpiceJet’s share of seat capacity was above 20%. The impact of any closure of this beleaguered airline on seat availability and airfares will be felt less on trunk routes and more on regional routes, some of which are serviced only by SpiceJet.

Chart 2: On as many as 21 routes, mostly to or from smaller cities and towns in the South, only SpiceJet was offering a direct flight.

Chart 3: SpiceJet’s weekly seat-capacity share was above 25% on 74 direct flights that it expressed an intention to fly in its last full schedule (dated 26 October). On as many as 39 of these 74 routes, the player with the largest or second-largest capacity, SpiceJet included, was IndiGo. And, on 14 of these 39 routes, IndiGo was the only other airline. Jet Airways (India) Ltd is the next biggest likely gainer, after IndiGo, on account of SpiceJet’s ongoing troubles.

According to Kapil Kaul, CEO, South Asia, Centre for Asia Pacific Aviation, the challenges for other airlines to fill voids left by SpiceJet are of an operational nature and not regulatory ones. “It’s very difficult to increase capacity at short notice given challenges in finding the right aircraft with matching specifications to their existing fleet," he says. “More importantly, except IndiGo, all other airlines are struggling and I see no merit in their expansion."

Since the busy period of the winter holidays is behind us now, the impact of any SpiceJet curtailment or collapse will be relatively less pronounced. Broadly, the impact on airfares can be broken into two buckets: metros and regional routes. “It would be felt more acutely in tier II and tier III sectors. How soon others can cope up, nobody knows," says a senior industry official of a South-based airline who was previously with SpiceJet, requesting anonymity. “There are a lot of players who are coming in with smaller aircraft, but none of them have been cleared to fly. There are about 14 airlines with NoCs (no-objection certificates). For them to get aircraft and obtain permits, that is not going to happen overnight." 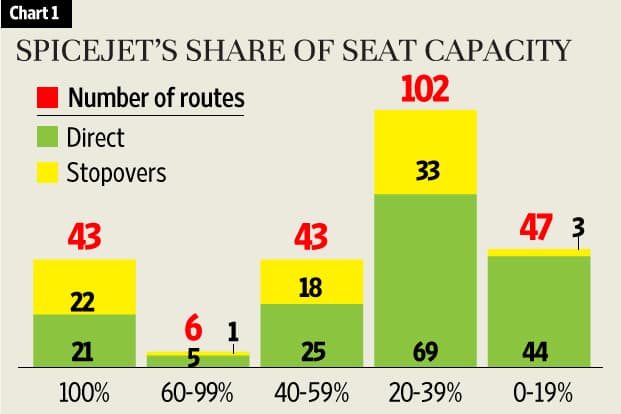 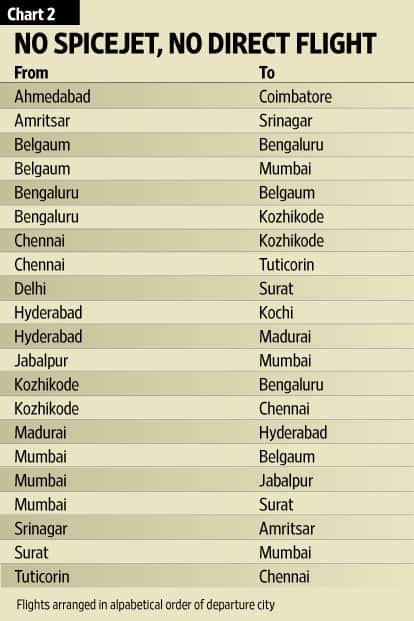 howindialives.com is a Delhi-based startup that is developing a search engine for public data to make it more accessible to decision-makers.