Bangalore: In its 10th year, the John F. Welch Technology Centre in Bangalore, the first research and development centre outside the US for the $156.7 billion conglomerate General Electric Co. (GE), has a new managing director, Sanjay M. Correa. One of the 191 GE officers globally who perform critical roles and lead large revenue generating businesses, Correa, along with another GE officer John Flannery, the new president and chief executive of GE India, reflects the company’s renewed push in the Indian market. 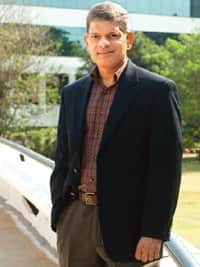 Local vision: Sanjay M. Correa managing director of GE’s John F. Welch Technology Centre says localization is key, though its timescale and magnitude depend on the needs of the Indian market. Jagadeesh NV/Mint

An aerospace engineer with a pilot’s licence, Correa still has a passion for planes so deep that “given a choice, he’d be on the airfield, watching planes". For now, he’s riveting his gaze on the pent-up demand that the Indian market may offer.

It’s also a market that Correa needs to familiarize himself with. He returns to India 34 years after he left the electrical engineering course at the Indian Institute of Technology, Bombay midway in pursuit of aeronautical engineering in the US. Correa is overwhelmed by the transformation the country has undergone.

In an interview, he tells Mint how he plans to align GE’s interests with that of the Indian government. Edited excerpts:

Guillermo Wille set up and ran this place for 10 years. Being a newcomer, what’s your leadership style going to be?

This place is more mature and sophisticated now. It can do lot more than what it is doing especially because India is a huge growth market; we have seen a whole new dynamic in the last 18-24 months.

As we put more product line leaders in India so that we serve the local market better—from large infrastructure projects to distributed healthcare products—we will look at developing products for the local market.

As Covax falters, vaccine gaps persist even among poore ...

Things to check before buying a deferred annuity plan

This is a new vision for us, this place was never used in that way; it was an extension of global engineering. This is very exciting for the employees as well as for the commercial leaders here.

We’ll partner with the government (of India), share their vision of what is needed and make sure our interests are aligned. This is very natural in the US or the UK, but was not practised here before. I’ll bring that game here.

In healthcare you’ve demonstrated that products developed here can be exported to developed markets. Is there any other segment where you see a similar cost advantage and a great product emerging?

Only a small percentage of people are working on it, so the answer is no. But that’s the opportunity for us and we are asking our engineers what they can design for the Indian market. I want to get 100 such ideas and have the commercial team look at them. Maybe 70% (of the ideas) are naïve, but 30% will have legs under them. My belief is that in next 12-16 months you will see many such products.

After all, one in five researchers in GE works here and it is trending up. We will hire at least 600 people this year. I hope that everybody has some degree of passion in what they do.

We are in the middle of that process; emphasis will be on power generation, from mega nuclear plants to biogas engines and all shades in between; rail… We will try and localize as much as possible, though timescale and magnitude will depend on the market needs.

What are some of the big technology bets that you are taking here?

We can’t hiccup on any of the six areas that we operate in.

Some 550 aviation engineers are working on next generation engine technology, one that would replace the CF6 family of engines. Then there is advanced technology design for next generation commercial engine platforms such as LEAP X and NG34, meant for the future narrow body and regional jet aircraft which offer up to 15% fuel burn advantage and substantial improvement in noise and emissions over today’s engines.

India is a low wind regime country and has an on-shore wind energy potential of 45GW of which 10GW has been installed. We are developing new blades and better controls for enhanced wind turbine performance. Once developed, this technology will also serve other low wind regime markets.