Online gambling is not legal in India—other than in Sikkim. Yet while you can’t play poker with real money, it’s possible to get into a game of rummy and walk out richer—or poorer, of course. For, according to a 1967 Supreme Court ruling, rummy is recognized as a game of skill, not of chance—therefore, it is legal to play online with stakes. 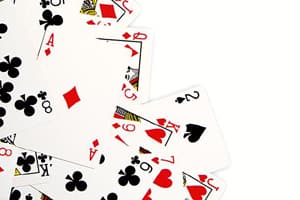 In other countries, the laws vary. For example, in the US, gambling online on poker is illegal; in the UK, it requires a licence. The states here are able to frame their own gambling laws, which is why Sikkim has been able to legalize Internet gambling.

This could change quickly though. In March, the Madras high court prohibited a Chennai club from playing rummy for stakes and making a profit from this. The club has approached the Supreme Court, and a decision is expected in September. As reported in The Hindu on Sunday, the Supreme Court has given a temporary stay on the high court decision. The apex court will now take a decision on whether games of skill can be played for stakes, and if organizations may profit by offering such services, a decision which will affect the websites too.

Vijay Singh, 24, is a film editing professional who moved from Delhi to Mumbai in 2011. A stranger to the city, Singh plays a lot of online games every evening, including rummy for cash, on Games24x7.com.

Singh plays other games online too, and says he likes car-racing games when he wants to relax. “The rummy games are exciting because of the money involved. I set aside ₹ 500 each weekend, less than what going to a 2-hour movie adds up to."

More often than not, he has lost that ₹ 500, but there have been times when he’s doubled and even tripled the money he started with. “Overall, I’ve won ₹ 800 this month, and had a lot of fun."

For Zapak and the other sites, the process is simple. You buy virtual counters for real money, and use them as stakes for the games. To play, log on to the website, and start playing. If you win, you “cash in" your counters, and get a cheque. The sites take a transaction fee of 15-20% depending on the total value of each game.

The sites also offer free versions of the game—played only for points, and not for real money. In absolute numbers, this is far more popular—Abbot and Deepak Gullapalli, the Hyderabad-based CEO and founder of Ace2Three.com, say that on their sites, the number of paying players is only 20% of the total users. Abbot adds, “I can’t disclose the break-up but the paid version is much more lucrative for us."

According to Abbot, the higher- stake games are more popular among users. “The maximum stake we have goes up to ₹ 800, and that room is full more often than the minimum, ₹ 20 stake."

To keep users interested, the sites also arrange tournaments. Games24x7’s Mumbai-based chief operating officer (COO) and co-founder Bhavin Pandya says, “We run tournaments for eight to 1,024 players." They have a dozen daily tournaments, which usually have up to 256 players, and 32 winners, for a prize of ₹ 415 each, but there are also weekly tournaments with 128 players, and prizes of ₹ 3,264 and ₹ 8,500, going up to ₹ 27,200.

There are dozens of websites where people play rummy online, some free and some paid. The biggest is probably Games24x7, which claims 900,000 active users—Gullapalli says Ace2Three has around 200,000 active users while Zapak, whose rummy site is only six months old, has 100,000.

If the Supreme Court upholds the high court decision, then all these sites may have to reconsider their business models. Gullapalli says, “If this happens we will continue to offer rummy without cash, and look for other revenue models. We have over 30,000 paying customers who would be negatively affected if that were the case."

The three main websites today are Games24x7, Ace2Three and Zapak, and each has slightly different draws:

Players can play for free as well, and only around 20% actually use the paid format.

To interest new users, there is a ₹ 500 “welcome bonus", while users are also encouraged to refer their friends, with a cash bonus of up to ₹ 27,500 for this.

The company says it has users from all over the country, though it doesn’t allow players to register from states such as Orissa or Uttarakhand, which have “unclear rules about online card games", says Gullapalli. People could sign up with a false address, but since payments take place through cheques mailed to the address, it wouldn’t make sense to do so.

There is a secure software platform in place to prevent cheating and cash fraud.

Games24x7 organizes users into tournaments, depending on the amount they want to stake initially. The players can progress through the tournaments and win larger sums in each round.

Aside from the tournaments, there are also multiplayer matches which randomly pit players against each other—the stakes in these “friendly" matches can be as little as ₹ 5 per game.

The site offers a signing bonus of ₹ 500, and woos players with freebies such as free tokens to wager.

The site is only for people living in India.

The company uses special software to prevent cheating, and has a special software for random numbers, used for card shuffling. Pandya adds, “Security is still improving, and we will continue to make sure of it."

•Winnings of ₹ 17 lakh per month (across all users)

There are no tournaments, players can join rooms. Instead of playing strangers, you can plan to meet in a particular room and play with friends.

The rooms are organized by stakes, and the number of players in a game.

To play, you only need a Zapak id, which is also used to access the other free games on the site.

Stakes are from ₹ 20, going up to ₹ 800. The higher values are the most popular, and are usually full before the low-stake rooms.

The site requires your age and address, and like the others, uses credit card details as verification. There are no sign-up bonuses.

The site is open only to people living in India, for legal reasons. Abbot says: “In the US, for example, this (rummy for stakes) is illegal. Each country has its own laws, so to avoid problems we target only India."

There are safeguards to prevent cash fraud and all computation takes place on the site, so it’s not possible to cheat in a game.