With Reliance Jio already having acquired a fair amount of scale in terms of paid subscribers, a moot question is if its latest offer of free services will attract attention of CCI

Reliance Jio Infocomm Ltd said last Friday that it had a paid subscriber base of 72 million, making it the largest mobile broadband services company in the country.

Bharti Airtel Ltd had a mobile broadband subscriber base of 37.7 million in December 2016, or about 14% of its total mobile services customer base.

Reliance Jio didn’t say what proportion of its total users became paid subscribers. Based on some estimates, it retained about 60% of total users as on 31 March, which is great news from Jio’s perspective, but terrible news for incumbents.

Worse still, Reliance Jio has said that its services would remain free for three more months till end-June for certain subscribers. 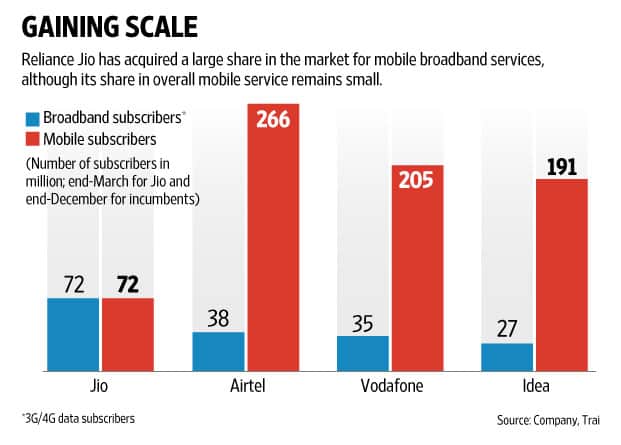 With Jio already having acquired a fair amount of scale in terms of paid subscribers, a moot question is if its latest offer of free services will attract the attention of the Competition Commission of India (CCI).

Sure, to be precise, the latest free offers apply to those who have made an upfront payment of at least Rs402. But a majority (about three-fourths) of this payment will be accounted as revenue for services in July. Services for April-June will effectively be free, which means Jio would have provided free services for at least 10 months in succession.

Competitors such as Bharti Airtel have accused Jio of predatory pricing right from September, when it launched its services free of charge.

Back then, this paper had pointed out, citing an expert in competition law, that charges of predatory pricing become relevant only when a company already has a dominant position in the market.

Jio, being a new entrant, didn’t fit the description then.

“If Jio garners significant share, and continues to price services below its cost price, charges of predatory pricing may be relevant at that point, although a fresh assessment will have to be made then," said Rahul Singh, the competition law expert from Balliol College, University of Oxford, at the time.

Now that Jio has acquired a significant share in the market for mobile broadband services, charges of predatory pricing may be more relevant.

And by Jio’s own admission, a large number of its subscribers who were using its free services are now willing to pay for its services.

Of course, Jio may argue that the relevant market in this case is overall mobile services, where its share is still very small.

The incumbents may argue otherwise.

They may even say Jio has enormous market power as a result of being a part of one of the largest conglomerates in the country.

To be sure, deciding on charges of predatory pricing is a complex issue.

Currently, the arguments between the Telecom Regulatory Authority of India (Trai) and the Telecom Disputes Settlement and Appellate Tribunal (TDSAT) have created much heat but have thrown little light on the issue.

Airtel has registered a compliant with CCI regarding predatory pricing in early February, although there is no clarity on how far the commission’s investigations have gone.

This column has argued before that CCI is best placed to rule on the predatory pricing issue.

It’s time it weighed in.