Italian fashion brand Diesel will launch in India by the third week of March in partnership with Reliance Brands Ltd, a unit of Reliance Industries Ltd. Diesel SpA has been trying to enter India since 2007, but its previous joint venture with Arvind Mills Ltd fell through. 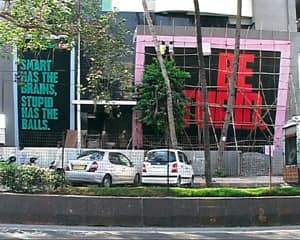 India focus: A Diesel store coming up on Juhu Tara Road in Mumbai. The Italian fashion brand has been trying to set up shop since 2007.

The premium apparel and accessory brand will have five stores—two in Mumbai, and one each in New Delhi, Hyderabad and Bangalore. Positioned as an “alternate to luxury", it will take on brands such as Hugo Boss and Paul Smith, starting with its debut spring-summer collection.

Experts said the fact that Diesel is reasonably well known within its upmarket target group, especially for its denims, will make its jeans, priced at Rs8,000-17,000, the brand’s primary driver. The Diesel range starts at Rs2,000 and goes all the way up to Rs50,000. While it may be too expensive for the average Indian, it is priced on par with its international range and the firm is confident of its pricing strategy.

Darshan Mehta, chief executive officer of Diesel Fashion India Reliance, disagrees with the opinion that a cheaper entry-level pricing may resonate well with the consumer.

“A lot of our research shows that so long as you are giving them what I call the ‘real thing’, in the real environment, and something that’s as good as it is in the best place in the world, they’ll lap it up," Mehta said.

While experts recommend aggressive pricing to generate volumes, Reliance Brands believes that if the service quality and supply chain are under control, the volumes will automatically rise. So it is focusing its energies on distribution, store design and marketing.

Globally, Diesel typically spends 8-10% of its annual sales on its advertising, which is considered iconic by many because of its provocative and sometimes shocking ads. In January this year, Diesel globally launched the “Be Stupid" campaign, which shows the brand and its patrons as bold, brave and young at heart.

The same campaign will be extended to launch the brand in India in a few days’ time. While traditional media such as print, outdoor and cinema will be included in the media plans, the firm plans to use activation and virals to reach out to potential customers.

“We’ll throw cool parties, we’ll shock and provoke the consumer, we’ll touch them at points that are most unexpected," Mehta said. “We’ll juxtapose ourselves in situations where suddenly, being stupid makes so much sense. This doesn’t work like a soaps and shampoo campaign where you say ‘so many TRPs (television rating points), so many GRPs (gross rating points), so many channels, because finally in a country of 1.4 billion people, we are looking at a very small percent’."

The campaign in India will be executed with the help of Delhi-based agency Happy.

India saw international brands such as GAS, which was brought in by Raymond Ltd, and Etam, which was distributed by Pantaloon Retail (India) Ltd, withdraw from the market in 2009, just two years after launch. Confused positioning, low awareness, a flawed pricing strategy and expensive real estate were some of the factors that contributed to their hasty exits.

Explaining what went wrong in those cases, Gupta said, “Their entry strategy was very confusing. The Indian market wanted a denim platform for the launch of a semi-luxury brand. Some of these brands brought in the nuances of their parent organization, which had already basically developed into a lifestyle brand. India had to go through a learning curve and the platform to begin with had to be more niche, instead of a total lifestyle platform. I think that’s where they crumbled."

Diesel is used to selling an attitude. But Indians may wear that attitude only if it comes at the right price. Although industry experts have mixed feelings about the brand’s success, Reliance Brands believes it has a good bet going.

In fact, Reliance Brands has much more up its sleeve for 2010. It will launch footwear brand Timberland and sportswear brand Paul and Shark in India by the end of the year and says it has the strategies for these brands also well drawn out.