Not all hip implants faulty, everyone won’t be compensated: J&J

The implant, known as DePuy ASR, was sold in India by DePuy International, a unit of J&J, and has come under severe scrutiny of government agencies

New Delhi: The Indian orthopaedics unit of global pharma giant Johnson and Johnson (J&J) will work out a compensation plan for patients affected by its faulty hip implants in consultation with the Indian government, a top company executive said in an interview.

The implant, known as DePuy ASR (where ASR stands for Acetabular Surface Replacement), was sold in India by DePuy International, a unit of J&J, and has come under severe scrutiny of government agencies after a Mint investigation published on 23 August exposed the sufferings of patients who had to go through revision surgeries. 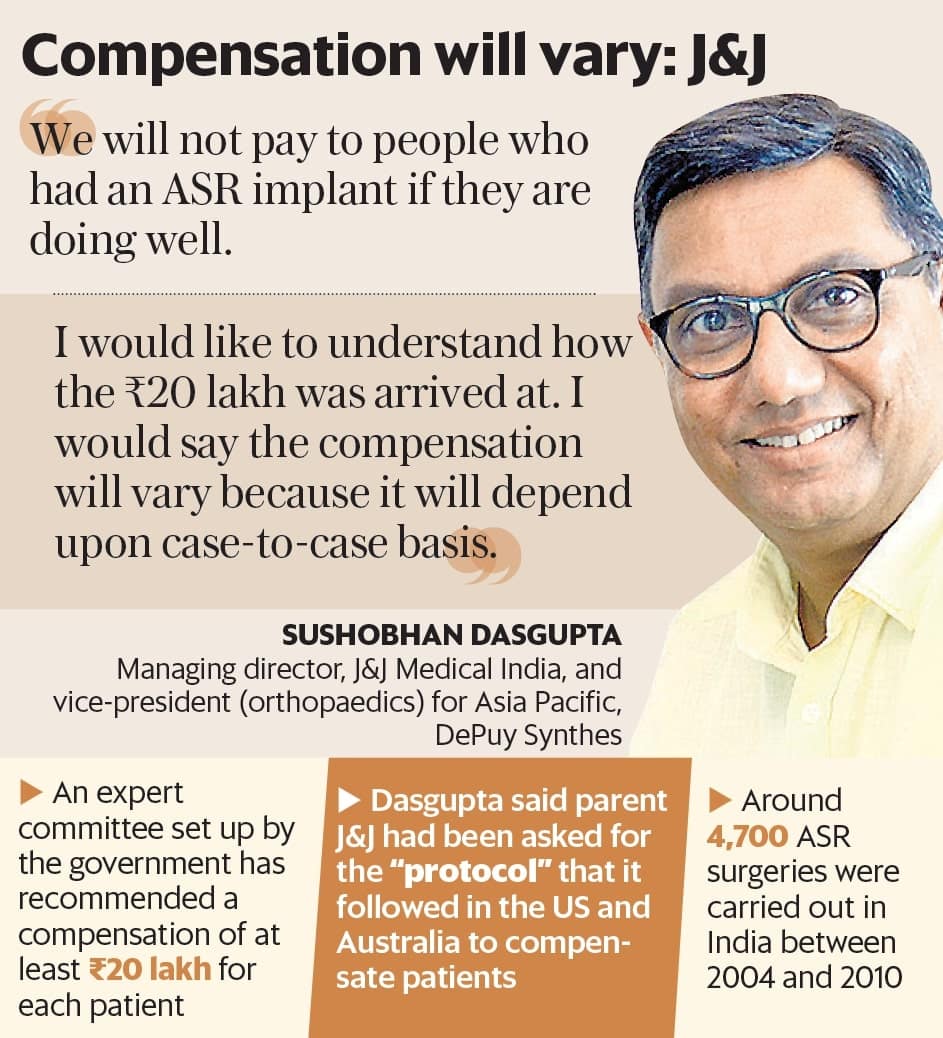 “We are in principle okay with the compensation but not the methodology bit… For example, if a patient is okay and doing well why would that patient register? Similarly, even in the US and Australia, the amount of money that has been given is only to patients who have gone through a revision surgery," said Sushobhan Dasgupta, managing director of J&J Medical India, and vice-president (orthopaedics) for Asia Pacific, DePuy Synthes.

Dasgupta clarified that the compensation couldn’t apply to everyone who had an ASR: “We believe that is not right because ASR hip implant is not faulty."

Dasgupta also said that there were inaccuracies in the report prepared by an expert committee set up by the government.

The committee had recommended that each patient be compensated at least ₹ 20 lakh.

“We would like to go by protocol. We would work with the government, we would like to work with the expert committee and try and see what is the best way forward to be able to ensure that patients who required certain amount of money as compensation... is fair, equitable and adequate," Dasgupta said. “I would like to understand how the ₹ 20 lakh was arrived at. I would say the compensation will be varying because it will depend upon case-to-case basis."

“We will work with the government to ensure that..., we will give them (government) the expertise because we did the same thing in Australia and the US," he said.

Dasgupta said that his company had asked its parent for the “protocol" or the procedure that J&J followed in the US and Australia to compensate patients.

“We would like to study the protocol. If we believe it is feasible, we will offer that to the expert committee because there is no point in reinventing the wheel if there is something already there," he said.

The Indian government on Wednesday told J&J to trace and compensate all faulty hip implant patients.