Mumbai: With a flashy new model of its best-selling Swift hitting showrooms and India’s traditional festive car sales boom just around the corner, September was supposed to be a month to cheer for Maruti Suzuki, the country’s biggest carmaker.

It didn’t work out that way.

Labour unrest that began on 29 Aug has crippled production, sending sales tumbling and allowing rivals to eat into its market share in an industry fighting for customers as high costs and interest rates bite.

A failure to end the unrest, despite talks brokered by the state government of Haryana, where both plants are located, comes as Maruti feels the heat of rising interest rates and input costs that have hurt demand in the world’s second-fastest growing major auto market after China. 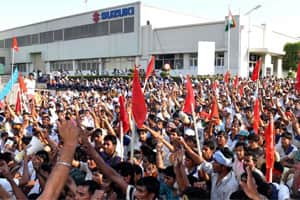 The two Maruti plants, which typically make 600 Swifts a day, assembled 300 of those models on Wednesday, resuming production on Tuesday after a complete shutdown of a week.

Even if the carmaker is able to ramp up production to twice that figure on a daily basis, clearing the backlog of orders could take around six months.

“There is no way market share can be secured when we don’t have the cars to sell," a company spokesman told Reuters. “Right now, all our efforts are to maximise production and get close to normal levels."

Maruti, which produced every second new passenger vehicle sold in India last September, accounted for only 40% of sales last month, according to data from the company and industry body Society of Indian Automobile Manufacturers.

“It’s particularly damaging that they have not been able to increase production during the festive season, which is when they need the extra cars the most."

Carmakers typically see a sales boost in October during the annual festive season, when Indians receive bonuses and big-ticket purchases are considered auspicious.

Maruti, 54.2% owned by Japan’s Suzuki Motor Corp , has suffered a total production loss of over 64,000 cars in 2011 due to strikes by its employees, a shortfall equivalent to around $400 million.

Industrial action first flared up in June when a 13-day strike by workers demanding the firm recognize a new union lead to a production loss of $95 million.

Maruti has lost 12 percentage points in the last 12 months. That looks set to skid further as the unrest rumbles on.

Suzuki has also had to deal with a halt in production at its motorcycle factory in Thailand since 12 Oct due to floods in the country.

Still, analysts suggested that Maruti could claw back some of its market share if it can end the labour dispute.

“Cancellations from Swift customers haven’t been that large, people are prepared to wait. That is a big positive for Maruti moving forward," said Vineet Hetamasaria, analyst at Mumbai-based PINC research.

“When things calm down again, we’re expecting Maruti to rebound back to a market share in the high 40s."

Maruti shares have fallen almost 25% since January, underperforming a near 18% fall in the broader market.