New Delhi: Bangalore, India’s technology capital, will soon boast a 47-floor highrise on Residency Road targeted at India’s uber-rich, with each condominium priced at anywhere between Rs23 crore and Rs40 crore (about $5-9 million).

The residential tower, called Bangalore 47, is being developed by a consortium comprising Bangalore-based realty marketer Asipac Projects Ltd, project management and architecture design firm Synergy Property Development Services Pvt. Ltd (35% owned by private equity firm Blackstone Group LP) and property developer S.S. Kumar at an estimated cost of Rs559.75 crore. The project will have a built-up area of around 287,000 sq. ft and is expected to be ready by 2011. 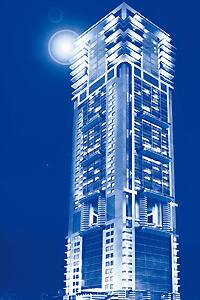 Sky is the limit: An artist’s impression of the project being developed by Asipac. The project is estimated to cost about Rs560 crore.

The luxury residential segment in Bangalore is still going strong although a softening real estate market has forced many developers elsewhere in the country to target mainly the mid-price bracket.

Developers such as Alliance Group, Sobha Developers Ltd and Nitesh Estates Ltd have all said they will be building luxury villas and homes in the city.

“It all depends on the supply," says Shailesh Kanani, an analyst at brokerage Angel Broking Ltd. “There is a lot of difference between the north and south real estate market. The north has seen so much supply in the luxury residential segment that builders (in the region) are not launching anything new in this category."

“Not all developers are concerned about the slowdown. Developers with a long-term view and enough funds to go ahead with construction are not waiting for the slowdown to get over to launch projects," Kanani added.

Although Bangalore has traditionally been a city of villas and bungalows, the trend has clearly shifted to tall buildings. Brigade Gateway, a project in Yeshwantpur, has a 30-storeyed commercial building named North Star.

Bangalore-based developer Brigade Group says that once completed by 2009, it will be the city’s tallest commercial building.

The Bangalore 47 project will have only 19 luxury condos for sale, a number deliberately kept low to build exclusivity. The consortium would also include an international architect while a builder of luxury properties in the US will provide technical know-how. Asipac declined to name the architect and builder.

“We want to build a property where an (Wipro Ltd chairman) Azim Premji or a (Reliance Industries Ltd chairman) Mukesh Ambani will be proud to live in," said Amit Bagaria, chairman of Asipac. “We are targeting corporate customers who want the same luxury lifestyle that they are used to in a farm house, in the heart of the city."

The apartments will start from the 17th floor, following a trend mostly seen in Mumbai where developers build flats from the 15th floor onwards to ensure a view of the sea.

“This is to protect residents from traffic noises," says Bagaria. “Views are always good only from the 17th and 18th floors onwards. Also, when somebody is living in an expensive condominium, they don’t want to see autos on the road."

The first 11 floors will be reserved for parking. Other floors would include facilities such as health club, spa, and a fine dining restaurant. It would also have a 20-ft high so-called sports floor.