Hemendra Kothari to step down as chairman, DSP Merrill Lynch

Hemendra Kothari to step down as chairman, DSP Merrill Lynch

Mumbai: He has had enough of bulls and bears, and so, starting April, Hemendra Kothari, chairman, DSP Merrill Lynch Ltd, will likely spend time with tigers. 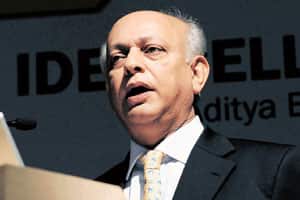 He will, however, continue to hold his 60% stake in the mutual fund house, DSP BlackRock Investment Managers Ltd, in which BlackRock holds the remaining stake. Kothari will continue as non-executive chairman at the fund.

The global takeover of 84-year-old Merrill Lynch and Co. Inc. by Bank of America in December made it almost inevitable that Kothari would get out of DSP Merrill in India sooner than later even though he kept denying it. Kothari is one of the three legendary Ks of the Indian investment banking business—the other two are Nimesh Kampani of JM Financial Ltd and Uday Kotak of Kotak Mahindra Group.

For a man whose family has been into stockbroking for four generations, Kothari was remarkably dispassionate about his exit from the company. “I could have done this a few months ago, but I’ve been waiting to see the merger (global merger of Merrill Lynch with Bank of America) and integration go through smoothly," he said.

Kevan Watts, president of DSP Merrill Lynch, will head the combined broking and investment banking operations in India, and Vishwavir Ahuja, head of Bank of America’s Indian operations, will lead the corporate banking business of the combined entity.

Kothari said he will now focus on philanthropy and environmental conservation. The Kothari family has been running several educational trusts for generations. It runs the Kothari hospital in south Mumbai, a girls’ school at Nashik, a hostel for boys from rural areas in central Mumbai, and a sanatorium at Deolali, some 160km north-east of Mumbai.

Along with Ajay and Urvi Piramal, Kothari had a few years back set up the Wildlife Conservation Trust, dedicated to raising awareness for environment and wildlife conservation and protecting the Tadoba Tiger Reserve in Vidharba and the Sanjay Gandhi National Park in Mumbai.

“It’s his obsession with tigers that has made him a conservationist," said Kakubhai Kothari, a long-time friend whose photographs the DSP boss has used in many of his firm’s wildlife calendars.

Kakubhai, who runs a photography equipment shop off Chowpatty in south Mumbai, said he wished semi-retirement would allow Kothari to devote more time to tiger conservation.

“It’s not just the money you spend on conservation that matters; it’s also the results, which take a long time to come. I hope he (Kothari) realizes that and spends more time to monitor how well his money is being spent on tiger conservation. He should monitor it like he monitors his investments," said Kakubhai.

It was almost 150 years ago that Kothari’s great-grandfather, who was incidentally the founding director of Asia’s oldest exchange, the Bombay Stock Exchange, founded DS Purbhoodas and Co., from which DSP got its name. Kothari himself was the president of the exchange, and so was his father. He joined DS Purbhoodas around 40 years ago and, in 1975, ventured into investment banking by setting up DSP Financial Consultants Ltd along with Shitin Desai, Kothari’s friend from his Sydenham College days. His other close friend is Deepak Parekh, chairman of India’s oldest mortgage firm, Housing Development Finance Corp. Ltd.

With Kothari at the helm, the firm has done quite a few novel deals including the first recast deal for a state-owned power utility (in Orissa) and the first hostile takeover in the cements business (India Cement Ltd’s takeover of Rassi Cement Ltd). DSP Merrill Lynch’s other big-ticket deals include the ongoing merger of Reliance Petroleum Ltd with Reliance Industries Ltd, Swiss cement major Holcim Ltd’s acquisition of a 50% stake in ACC Ltd for around $1 billion in 2005 and ICICI Bank Ltd’s $1.7 billion simultaneous domestic and American depository share add-on offering in 2005.

Apart from the mutual fund, Kothari will also continue to lead DS Purbhoodas and Co., a forex broking entity, as a partnership firm.

“In some ways, it (Kothari’s stake sale) marks the end of an era. It’s really an unmatched kind of successful run, taking a firm from scratch to leadership," said Amit Chandra, who left DSP Merrill Lynch after a 14-year stint in 2007 as a managing director and board member. Chandra is currently a managing director with Boston-based private equity fund, Bain Capital Llc. “A lot of people create value for themselves, but Hemendra leaves behind a thriving organization and a legacy," said Chandra.

Still, there are questions on how well DSP Merrill Lynch has handled the slowdown.

There have been reports that DSP Merrill Lynch has laid off a number of people from every business in which it operates, be it equity broking, investment banking, wealth management or third-party distribution of retail financial products. A broker, who did not want to be named, said the third-party distribution division has been shut completely, and all its employees asked to leave. This could not be independently verified.

Rajiv Gupta, who was joint managing director at DSP Merrill Lynch before he went on to join the buyout division of Carlyle India Advisors Pvt. Ltd, as managing director, said: “To the world, Hemendrabhai represented exceptional warmth, old world courtesy, humility, trust, values, character, a sharp mind and love for tigers. But what we constantly heard from him was his one over-riding ambition and one stern caution, both of which reverberated in the environment at the firm—DSP had to be the most innovative and the best-regarded investment bank and it had to be absolutely ethical."

Gupta said that in all his several hundred business review conversations with Kothari over several years, he can’t recall even one instance where business was discussed without a parting enquiry from him about compliance and ethics. “He never hid his ambition for the firm, but he never forgot to emphasize the importance of ethics and he never could be anything but an exceptionally popular boss who taught us all a great deal," added Gupta.

While Kothari will be missed in the inner circles of the deal-making world, as Chandra puts it, “the winners out of this, will be the tigers of the world".