Mumbai: Nikos Kardassis, 54, chief executive officer (CEO) of Jet Airways (India) Ltd, is executing Project 360, an initiative aimed at saving India’s largest carrier by passengers flown $360 million in fiscal 2013 through cost cuts and revenue generation measures. Jet Airways has total debt of around ₹ 13,000 crore and made losses for five consecutive quarters, but Kardassis says debt was reduced by $200 million in fiscal 2012 and expects the figure to fall by $400 million this fiscal. He is vacating many high-cost domestic and international airport office spaces to cut rentals by 50% and expects $200 million from selling and leasing back planes.

The Greek-American, who is in his second stint as CEO of Jet Airways, spoke about his plans to resurrect the airline’s fortunes and about the aviation industry in an interview. Edited excerpts:

What mandate did chairman Naresh Goyal give you for your second stint with Jet Airways? 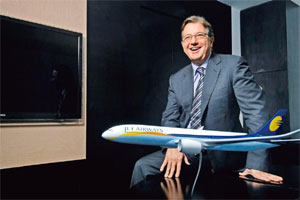 Having worked extensively with Jet Airways earlier, it has been a very happy homecoming of sorts for me personally. Naresh Goyal wanted to make Jet Airways a brand ambassador of India to the world in (a) profitable way.

Jet is tweaking its network schedule in an attempt to stay afloat...

It is not a question of staying afloat. Given the fluidity of our operational environment and the ever-changing uncertainties that pose a huge challenge to airlines globally, course corrections to ensure optimal operational efficiency have become necessary. As a responsive, customer-centric organization, it is critical that we handle these planned or unplanned deviations from schedules with minimal inconvenience to our guests. The optimal deployment of aircraft capacity in direct correlation with demand is just one of the initiatives undertaken. This has necessitated the redeployment of aircraft to more profitable routes to help the Jet Airways group consolidate its leadership position in the Indian industry.

What is the rationale for sale and leaseback of aircraft?

Given global uncertainties such as the ongoing euro zone crisis, slower-than-expected economic recovery in the US and slowdown of growth in China and India—scenarios that no one could predict a few years ago—fresh aircraft inductions planned then have become virtually unpalatable now. Sale and leaseback of aircraft is a common practice with airlines worldwide, and at Jet Airways we have been looking at this avenue as it helps in getting the necessary finance for our working capital and aircraft purchases. We can also exit from the old aircraft while unlocking the value.

You are also phasing out expatriate pilots...

At Jet Airways, we have continually been on the lookout to recruit qualified and talented Indian pilots who are certified globally and on par in terms of training with pilots worldwide. Currently, the phasing out of expatriate pilots has been necessitated by the reduction in the level of our operations for the monsoon season, and a speeding up of our internal training of qualified Indian pilots and upgrading them from co-pilots to captains.

What are the measures to boost ancillary revenues? How important is this exercise?

Economic difficulties and the resultant challenging environment, as explained earlier, are key reasons for airlines globally to consider ancillary revenue as an opportunity to improve their bottomlines. In 2010 the total revenue collection for ancillary revenue was in the region of around $18 billion. A year later, this grew to about $32 billion. Currently, the US legacy carriers lead the charge and European carriers are following suit. Nearer home, one or two Gulf carriers and many Asian carriers in the Far East are looking at this avenue to shore up their profits. The highest earners earn close to $40 per uplifted passenger. In the Indian context, currently carriers are facing financial turmoil due to high taxes, increasing infrastructure costs, depreciating rupee and fuel costs. So the goal in the next two to three years could be to build our ancillary revenue portfolio.

How are you tackling the ballooning debt?

There is no ballooning debt. Loan outstanding is $200 million less this year than last year. The company has undertaken stringent fiscal controls and explored several non-payroll areas to minimize costs. This year we are looking at sale and lease deals of 10 to 12 aircraft which get us around $200 million. We are expecting to bring our debt (down) by another $400 million...in the financial year due to various steps we have taken. Operationally, we have left no stone unturned to tackle our debt. For example, we have withdrawn deployed capacity on several domestic and some international routes, aligning capacity with current demand, and leased out surplus aircraft. Internationally, we are consolidating our network and looking to enhance frequencies or connect existing international destinations with more Indian gateway cities.

What are the main challenges that the Indian aviation sector faces?

The Indian aviation sector is faced with multiple challenges. On the one hand, there is the severely depreciating rupee against the dollar while on the other hand airlines have also had to contend with escalating aviation turbine fuel (ATF) prices. Then, there are the high infrastructure costs as well as the taxes imposed on the sector. On the infrastructure side, though, there has been a huge improvement with Terminal 3 in New Delhi and others across the country. However, the imposed levies and charges have only resulted in an increase in operational costs. A “Declared Goods" status for ATF would certainly ease the financial burden on the Indian carriers, contributing to a more robust balance sheet. It will, though, not alleviate all of the woes of Indian aviation, which are dependent on multiple variables.

In the short term, FDI is not a better solution, but it may help in the long term.

What story will Jet Airways tell the world in the next five years?

According to The Huffington Post, we are considered the second best airline in the world. We are cautiously optimistic that in the next five years, Jet Airways will continue to grow and consolidate its leadership position in India and emerge as a major international carrier. The long-term vision for Jet Airways is...to be the best in the world, as a profitable company maximizing stakeholder value. We have taken steps under the code name Project 360 which will find out cost savings and revenue generation measures that will yield us $360 million in this year. I see no reason why Jet Airways is not profitable in this financial year.

What’s the future of Jet Airways Konnect? How is the consolidation with JetLite working out?

The consolidation of the erstwhile JetLite and Jet Airways Konnect into JetKonnect was part of the strategic rebranding exercise to consolidate the low fare service product under a single brand simplify the group’s service proposition and enhance brand recall. We believe the JetKonnect rebranding initiative has been proven to be extremely popular with guests and in the future will help us augment our revenues. Especially since we do not think that the low-fare market will go away in India. The global economy has to become really stable for a long time before people, especially corporates, feel comfortable enough to open their purses. So going forward, the demand for low fare seats--which is a very price elastic market--will be sustained.

Is the aviation industry facing its toughest-ever phase?

The last few years have been truly challenging for the global airline industry, mainly due to the global economic crisis that has transformed corporate landscapes globally. Effects of the economic slowdown, followed by the credit crunch, have been for the most part visible across industries but have directly impacted the global aviation industry and more pertinently Indian aviation companies, most of which have been suffering losses. The slowdown of the Indian and Chinese economies along with the ongoing Euro zone crisis, its resultant impact on the banking sector, and the slower than expected US economic recovery could well place the profitability of airlines globally in peril.

What are the three things you wanted to change the landscape of Jet Airways and Indian aviation?

My top three priorities for Jet Airways would be to strengthen the company’s balance sheet, ensure that we offer our guests a truly world-class travel product and service experience and keep employee morale high, to help the airline to be the best in the world.

But high airport charges are killing...

We welcome the new airport infrastructure being built in the country, but the imposition of the higher user charges will lead to airlines passing on the costs to passengers, which in turn will have a negative impact on air passenger growth in the country. While we welcome infrastructural development, airport charges must be reasonable if airlines are to continue operating in an economically feasible business environment. Increase of charges by over 300% are absurd.

You enhance aircraft utilisation while carrying passengers from overseas to another overseas destination via India. More light?

India is strategically and ideally located to emerge as a world-class transit point for east-west traffic or vice versa. When the Delhi and Mumbai airports expanded it was but natural for an airline like Jet Airways to really utilize these two destinations in India as international hubs. We accordingly worked out a schedule whereby we could bring in traffic from the East for onward journey to Europe, US and North America and vice versa whereby one could connect flights to neighbouring SAARC and ASEAN countries.

For example, Jet Airways is extremely popular on the London-Bangkok and Dhaka-Kathmandu sectors (to name just two), via the airline’s international hubs in Mumbai and Delhi. It also helped in deploying our Boeing 737s to the Gulf and neighbouring countries during night on short haul routes. Thus we now see international operations accounting for 58% of the company’s total revenue.