BS-VI-compliant vehicles will be more expensive. Diesel vehicles and economy-segment motorcycles will see a sharp increase in price, which may keep buyers away for some time.

Come April 2020, India will upgrade to BS-VI from BS-IV emission standard. The Supreme Court has said the last date for the registration of BS-IV-complaint vehicles is 31 March 2020. Mint analyses the challenges for the auto industry and what these mean for customers.

What is Bharat Stage VI, or BS-VI, emission standard?

Bharat Stage VI is the most advanced emission standard for automobiles and is equivalent to Euro-VI norms currently in place across countries in Europe. Bharat Stage VI will be introduced in India on 1 April, 2020. Considering concerns over rising air pollution levels in India, the Union government had in 2017 decided to leapfrog directly from BS-IV norms for petrol and diesel vehicles to BS-VI emission standards to reduce vehicular pollution. Accordingly, the automobile industry was asked to comply with the directive before the deadline. 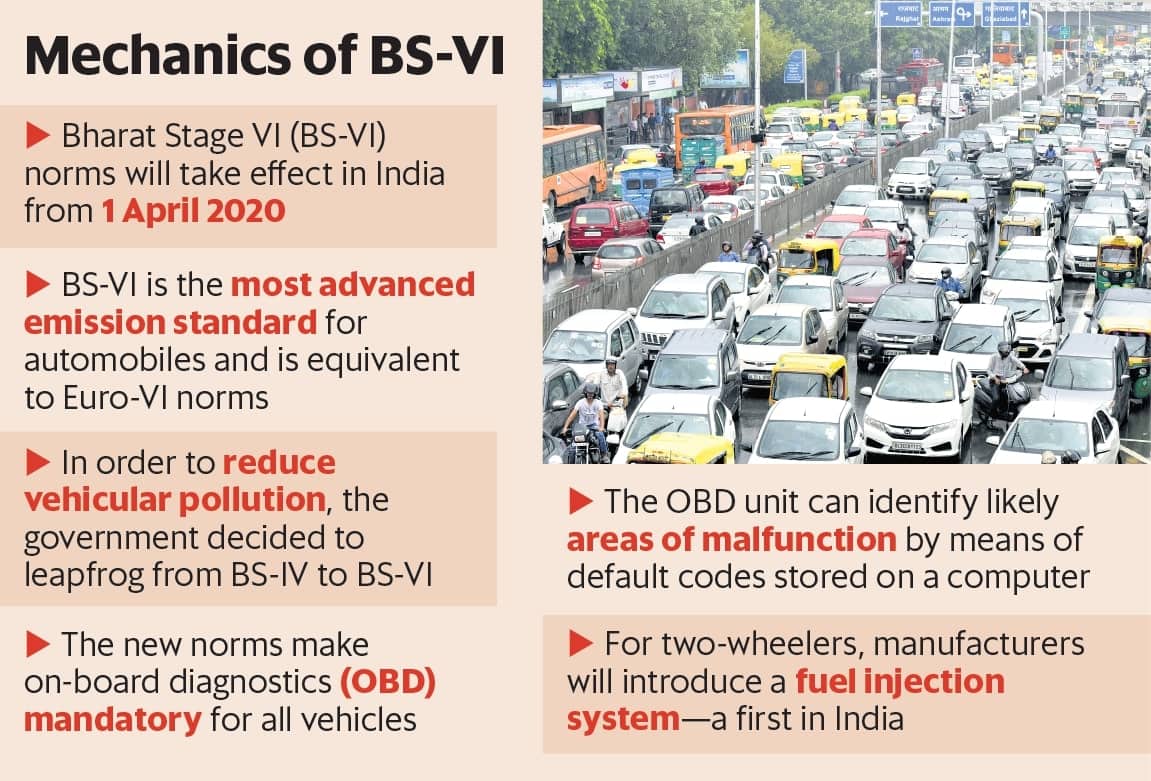 How will the vehicles change with BS-VI?

With the introduction of the new norms, on-board diagnostics (OBD) become mandatory for all vehicles. The OBD unit will be able to identify likely areas of malfunction by means of default codes stored on a computer, thus ensuring that the sophisticated emission control device, which is fitted in a BS-VI vehicle, runs at optimum efficiency throughout the life of the vehicle. For two-wheelers, manufacturers have to introduce a fuel injection system, which will be a first in India. Under the new norms, the difference in carbon emission between diesel and petrol engines will reduce substantially.

What does this mean for consumers?

BS-VI-compliant vehicles will be more expensive. Diesel vehicles and economy-segment motorcycles will see a sharp increase in price, which may keep buyers away for some time.

How will automakers be impacted?

Leading auto makers had to hike their investments to upgrade existing models and make them BS-VI-complaint. The number of product launches has declined in the past year. Firms are looking at products that won’t need much changes before the new norms take effect. Two- and four-wheeler makers have pulled capacity expansion plans, as they expect demand to fall. Maruti Suzuki India Ltd and Hero MotoCorp Ltd have been impacted the most, given that their product portfolio is large compared to competition.

What are the policy-related challenges?

The petroleum and natural gas ministry told the Supreme Court that vehicles not complying with BS-VI standards won’t be allowed to ply on Indian roads. This created a major confusion, given that the ministry of road transport and highways had notified that auto makers would get three months to exhaust their stock of BS-IV-compliant vehicles after the new norms are enforced. The apex court has said that manufacturers won’t be allowed to register BS-IV-compliant vehicles after 31 March 2020.