The Swiss Army Knife returns to the battlefield

The Swiss Army Knife returns to the battlefield

New Delhi: When considered carefully, the nomenclature of the Swiss Army Knife sounds all wrong. It’s not just a knife, of course; one model, known as the Giant, crams in 87 implements, only a few of which can be used to cut things. And although it may have been first designed for the Swiss Army in 1897, it has since passed into the realm of adventure sports and gifts for little boys. In popular perception, the knife’s connection to the Swiss Army is as abstract and tenuous as the Swiss Army itself. 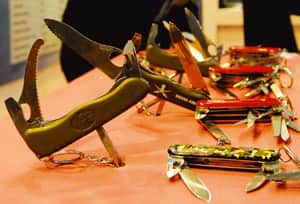 Cutting edge: Swiss Army knives at the 2010 Defexpo at Pragati Maidan. Victorinox has submitted a prototype to the Indian authorities for supply to the army and is now waiting for a decision. Ramesh Pathania/Mint

The turnover of Victorinox AG, the knife’s chief manufacturer, plummeted by one-third, and Wenger SA, the only other firm licensed to produce Swiss Army Knives, went bankrupt and had to be bought by Victorinox.

In a 2005 interview, Carl Elsener, great-grandson of the inventor of the Swiss Army Knife and president of Victorinox, said: “It was an absolute catastrophe for us."

The solution lay partly in making other products —watches, travel accessories, apparel, even a line of fragrances—but also in returning to the knife’s military roots.

“We started setting up shop in the Swiss pavilions in a lot of defence exhibitions, like this one," says Paul Camenzind, Victorinox’s international sales manager, at his company’s stall in the 2010 Defexpo. “And we found we’re usually one of the most recognized brands at the exhibition."

Victorinox now markets its knives hard to the world’s armies, allowing them to choose from an existing range of nearly 500 pocketknives or offering to customize the instrument if the order is large enough.

“Retail is still dominant for us. Our army business is probably not more than 5% of the entire business," Camenzind says. “But we have seen a certain—not saturation, but limit, let’s say—when it comes to retail. And we’re aggressive about the army business."

Thus far, according to Camenzind, Victorinox has received orders from 20 armies—the Dutch, German, French and Malaysian forces, among others. Every one of these knives is different; a bright coat-of-arms sits on the camouflage-printed body of the Malaysian version, while an insignia is embossed into the olive-coloured body of the Dutch army knife.

But the big prize, in terms of numbers, will be the Indian Army; Victorinox has submitted a prototype to the Indian authorities and is now waiting for a decision.

Anish Goel, managing director of Victorinox India, pulls the Indian prototype out of his pocket. It is a gorgeous, matte-black instrument, its body unusually hinged in half. “They’d asked us to include two tools in particular," Goel says. “One is a saw to cut metal, and the other is a marlinspike. The navy uses the marlinspike to tie knots and open shackles. And we’ve also included two blades instead of one."

The modern army’s need for an agile instrument like the Swiss Army Knife is a pressing one. J. S. Chopra, a retired colonel who serves as Victorinox’s institutional country head, remembers that when he graduated from his military academy in 1962, “we were all given a knife—just a knife with a blade, nothing else". Now, however, “we need tools to cut wood and to cut fruit, to open canned food, to tighten screws," Chopra says. “Earlier, somebody would have to run over to our position just to adjust the sights on our rifles. With a Swiss Army Knife, the soldier can do it himself."

Turning a retail instrument into a military device has necessitated some adaptations. “Armies usually need two things," Camenzind says. “First, the soldier should be able to open the blade with one hand." With the Dutch army knife, he demonstrates this, slipping the edge of his thumb into a purpose-built hole in a large blade and prying it open. “Or they can do this," Camenzind says, and, holding only the blade, he flips the body outwards, as if he were throwing a dart.

The other major requirement is for the blade or screwdriver to lock into place once it is opened up. Within the body of the knife, Victorinox installed slim steel dividers that keep the tool rigid and open; only by pushing the divider manually to one side can the blade be folded back into its groove.

There are also other minor tweaks. Instead of the usual shiny, smooth red case, for instance, the customized army knives sport rougher surfaces that are easier to grip, “especially with gloves", Chopra points out.

The Dutch army, when placing its order, asked specifically for a belt saw, which Victorinox added. “It’s this one here," Camenzind says, pulling out a curved, serrated blade. He pulls a stray patch of seatbelt fabric towards him and cuts it easily and cleanly with the belt saw. “Armies need this to cut parachute straps or pack straps or other fabric," he says. “We’ve put one of these into the Indian army prototype too, even though they didn’t ask for it."