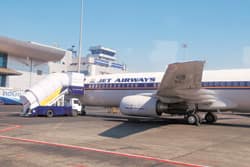 Cost pressure: A file photo of a Jet Airways plane at Mumbai airport. Jet will declare its results on Tuesday. Photograph: Hemant Mishra/Mint

Losses for India’s largest low-fare carrier Deccan Aviation Ltd, which is merging with Kingfisher Airlines Ltd and is now tracked by few analysts, are estimated at Rs350 crore, according to a single analyst’s projection.

SpiceJet will declare its results on 30 July. Deccan hasn’t set a firm date for reporting its results.

On Friday, Jet Airways shares rose 3.35% on the Bombay Stock Exchange to close at Rs433.50. Deccan Aviation’s shares fell 1.12% to close at Rs79.55 a share, while SpiceJet’s shares closed at Rs26.70 a share. Fuel prices, which have nearly doubled since last year and 15-20% hikes in airfares that then led to a slowdown in passenger traffic—which declined for the first time in four years in June—are largely seen as the reasons for the projected losses.

“The appreciation of dollar is also going to hit the carriers, especially Deccan and SpiceJet. These two carriers do not have any income through dollars, while most of their expenses are dollar-denominated," said a Mumbai-based analyst, who asked not to be named as he is not authorized to speak with the media.

An IDFC-SSKI Securities Ltd report projects Jet to show revenues of Rs2,740 crore this quarter, a 52% growth year on year primarily because of its international operations launched last year, while SpiceJet is expected to increase its revenues by 115% year-on-year to Rs571.1 crore and post a Rs70.1 crore loss compared with a profit of Rs18.5 crore in the year-ago quarter.

Nearly all Indian airlines have cut flights to reduce losses. SpiceJet, for example, has been using 15 aircraft for its daily operations from a fleet of 19, leasing out one of its aircraft to a European carrier and is looking to lease the others, of which one is undergoing scheduled maintenance. Until early this year, it was using a fleet of 18 aircraft, with the other delivered later.

Sreesankar R., head of research, IL&FS Investsmart Ltd, said the impact of higher fares will be felt more by the full service carriers in there results for the quarter.

“They will feel the pinch more then low-fare carriers," he predicted. “What happens is that when everyone increases fares, businesses, too, tell their (executives) to save on cost, leaving them to fly low-fare carriers."

The aviation sector slowdown is also reflecting on hotels sector. A Citigroup Global Markets report on the Indian hotels sector estimated business and tourist passengers as a segment is shrinking.

“With macro economic signals weak, business-tourist air-traffic growth down to 11-12% in first quarter of the calendar year 2008 against 31% in FY07 and supply risks on the rise, we believe the best for the hotel sector is over," Ashish Jagnani and Karishma Solanki said in there note released last week.

“Traditionally these (months of July-September) are lean season," notes an executive of a full-service airline.

“Though we have started imposing fuel surcharge and fixed basic fare to tide over the rising jet fuel prices, seat occupancy factor has been adversely affected because of high fares. I don’t expect any drastic change in the second quarter too."

Analyst Kaul expects the July-September quarter to be a “shocker" before some stabilization in the October-March peak travel period if oil prices don’t spike again. “Some of the numbers will be unbelievably bad in Q2," Kaul predicted.