New Delhi: GMR Hyderabad International Airport Ltd (Ghial) is finding it difficult to meet the early June deadline to replace its duty-free operator, Nuance Group AG, which exits its contract at the end of this month.

Poor business in the last two years prompted Nuance Group India Pvt. Ltd, the joint venture between the Switzerland-based company and its local partner Shoppers Stop Ltd, to walk out of airport retailing five years before the seven-year contract actually runs out.

Ghial, which will now award the contract for 15 years instead of seven years, had been expected to announce a replacement for Nuance by 7 May, but the process was delayed after potential bidders for the contract raised several issues at a meeting late last month. 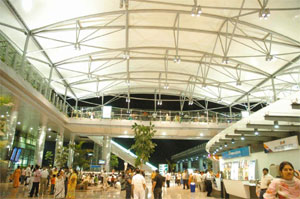 Waiting game: The Hyderabad international airport. The management had been expected to announce a replacement for Nuance by 7 May, but the process was delayed after potential bidders raised several issues. Bharath Sai/Mint

“It would be sensible for them to give Nuance an extension, otherwise the airport will be without duty-free stores," added the executive, who did not want to be named.

The head of a foreign duty-free operator, who attended the pre-bid meeting in Hyderabad, said Ghial had sent an email that it would revert to the potential bidders on their concerns. “But when will they get back, we don’t know," said the person, who also declined to be named.

Responding to Mint’s queries on the timeline for the bids, a GHIAL spokesperson said: “The bidding process is currently under way and we cannot give out more details... As communicated earlier, we are working towards a long-term contract and this is bound to take some time to finalize."

“We are looking at alternate scenarios after the Nuance contract ends on 31 May," the spokesperson said. “We are confident that when the new operator comes on board there will be visible improvement in sales and customer experience."

Ghial had high hopes of its retail business spread over more than 100,000 sq. ft.

Nuance Group India does not reveal sales figures, but it had been expecting revenue of up to $240 million (around Rs1,089.6 crore) over seven years.

However, sales were below expectations, partly because most of the international passengers flying to and from Hyderabad airport are Indian workers employed in West Asia who don’t match the free-spending profile of customers who shop at duty-free outlets.