Net sales, operating profit, net profit rise to the highest in at least 13 quarters, according to a Mint analysis

Mumbai: Indian companies have reported the highest earnings and sales in at least three years in the fiscal second quarter as the weakening of the local currency against the dollar boosted exports.

Net sales, operating profit and net profit rose to the highest in at least 13 quarters, according to a Mint analysis of 90 companies that have reported earnings so far for the three months ended 30 September. Figures before that could not be considered as financial statements of some of the companies in the list were not available as they were not publicly traded.

The rupee had depreciated about 11% in the quarter with the domestic currency reaching a lifetime low of 68.85 a dollar in August. Since then, it has appreciated to close at 61.27 on Friday.

Six of the 30 members of BSE’s benchmark Sensex showed healthy trends at an aggregate level. In most cases companies beat analysts’ earnings estimates. However, there are several companies that are still struggling in an economy that had slumped to a 5% growth rate in the year ended 31 March, the weakest expansion in a decade. The economy grew 6.2% in the previous fiscal.

“The companies that have come up with results so far, seem to have managed to sail through tough times," said Deven Choksey, managing director of KRChoksey Shares and Securities Pvt. Ltd. “A lot depends on what the results of remaining companies look like. We don’t have PSU (public sector undertaking) banks detailing numbers as yet, and they are likely to portray an impact from the difficult economic scenario."

Rating agency Crisil Ltd expects gross non-performing assets of the banking system to increase to 4.4% of total loans by the end of March, up from 3.3% last year.

The International Monetary Fund expects India to grow at 4.25% in fiscal 2014 even as the World Bank on Wednesday cut India’s economic growth estimate to 4.7% from 6.1% earlier.

Most of the 90 companies, including the Sensex constituents, managed to meet or beat analysts’ expectation. 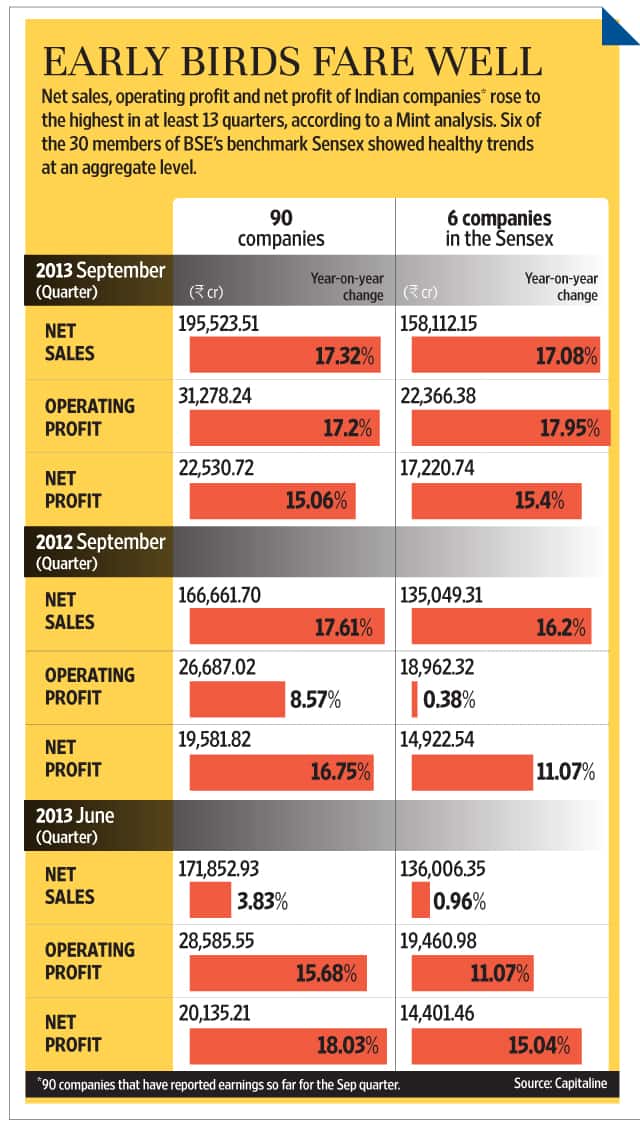 “L&T was positive surprise. Others were expected to do good, and a few turned out to be better," said Daljeet Kohli, head of research at IndiaNivesh Securities Pvt. Ltd. “The worst part lies ahead. It remains to be seen how mid-sized companies in the same sector fare to have a complete perspective."

“There are structural issues, which will take a long time to resolve. It is a better idea to be practical, than be optimistic only to be proved wrong later," he said.

L&T blamed economic conditions for the drop in profit.

“The investment climate in the economy is yet to show sign of recovery. Deferral of new projects and delayed decision-making and execution features the weak performance of the core sector this far," the company said in its outlook statement on Friday.

However, recent government measures such as improved allocation of resources to kickstart the stalled projects are “a welcome move to improve the investment sentiment", it said.

However, the company surprised analysts with a 23.1% operating margin—140 basis points (bps) higher than analysts’ expectations and 440 bps higher than a year ago. One basis point is a hundredth of a percentage point.

The rupee’s depreciation also boosted the profit of India’s largest companyReliance Industries. The company posted a 1.5% rise in net profit to ₹ 5,490 crore. A loss in the value of rupee also boosted earnings of Infosys and TCS.

However, the second quarter results also showed a rise in expenditure. Total expenditure for the 90 companies were at ₹ 1.65 trillion compared with ₹ 1.44 trillion in the June quarter and ₹ 1.41 trillion in the year ago quarter. Reflecting a high interest regime, interest costs rose to ₹ 1,977.12 crore from ₹ 1,680.6 crore in the year ago quarter and ₹ 1,834.71 crore in the quarter ended 30 June.

Operating profit margin for the companies narrowed to 16% in the September quarter from 16.63% in the June quarter and 16.01% in the year ago quarter.

Ami Shah contributed to this story.