The World Bank-assisted Ganga waterways project— costing ₹5,370 crore — will enable the commercial navigation of vessels and is set to be completed by 2023

New Delhi: India’s first inland voyage by a container ship since it gained independence from Britain 70 years ago ended when the vessel docked in the holy city of Varanasi on Monday, a development officials hope will help shift cargo from the country’s congested road and rail networks.

The 1,390km (863 miles) Ganga watercourse is one of the 111 waterways spanning 20,276km that India is reviving or planning to build. The World Bank-assisted Ganga waterways project—costing Rs5,370 crore ($738 million)—will enable the commercial navigation of vessels and is set to be completed by 2023.

Transforming country’s waterways could be a game changer for India as it will reduce the cost of transportation—50% less than highways—as well as easing congestion on roads. The move is designed to encourage companies such as NTPC Ltd, India’s biggest power producer, Maruti Suzuki India Ltd, the nation’s largest carmaker, Fertilizer Corp. of India Ltd and Tata Chemicals Ltd to use waterways to move cargo from cement to cars.

Shifting to water-based cargo transport should have happened at least 15 years ago, said K. Murali, professor at the National Technology Centre for Ports, Waterways and Coasts in the Indian Institute of Technology, Madras. “Over time it will pick up steam to become more economical and more sought after mode for shifting cargo—there will be certain cargo which will have preference to move in waterways." 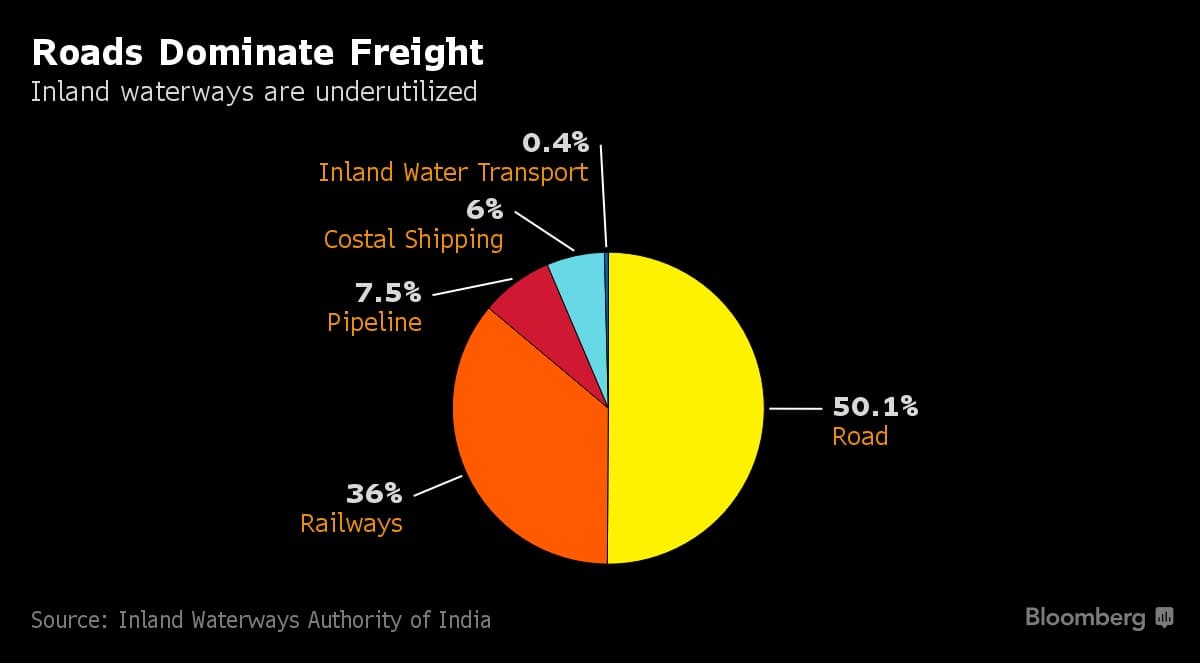 The vessel that sailed from Kolkata on 30 October was carrying food and snacks of PepsiCo Inc. in 16 containers, which is the equivalent of 16 truckloads. The Inland Waterways Authority of India vessel will make its return journey with fertilizers from Indian Farmers Fertilizer Cooperative Ltd.

To promote inland waterways, Prime Minister Narendra Modi’s administration has started dredging channels, building terminals and adding barges and has now set about convincing companies to use them. Modi was in Varanasi—which is also his parliamentary constituency—to receive the vessel and inaugurate the new terminal.

Modi’s administration also has plans to integrate coastal and inland waterways. His government has unveiled a $34 billion plan that aims to develop ports along India’s 7,500km coastline.

The movement of container in Ganga watercourse “is a significant milestone in the development of the inland waterways,’ an official from PepsiCo said in an email.

The share of goods transported via India’s inland waterways is less than 1%, compared with 42% in the Netherlands, 8.7% in China and more than 8% in the US.

“Inland water navigation is an underutilized infrastructure in India," said D. Dhanuraj, chairman, Centre for Public Policy Research, Kochi. While the government is trying to change this situation, the development of inland waterways and port projects has been slow, because “challenges are very high".