In a bid to ease investor concerns over its deteriorating bottom line, the Japanese consumer electronics giant said it would bounce back and make an operating profit in the current year of 180 billion yen. 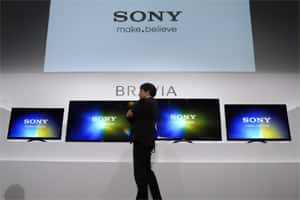 Analysts had forecast a full-year loss of ¥214 billion, according to Thomson Reuters.

Sony, which plans to axe 10,000 jobs - around 6% of its global workforce - according to media reports this week, has been hammered by weak demand for its televisions and fierce competition from South Korean rivals such as Samsung Electronics .

Kazuo Hirai, who took over as CEO this month, has promised to get the struggling TV business back on its feet within two years. That business alone has accumulated losses of $10 billion over the last decade.

Sony shares closed down 3.5% ahead of the announcement, its biggest one-day drop in three weeks. The benchmark Nikkei average ended around 1% lower.

The annual results are due on 21 May.